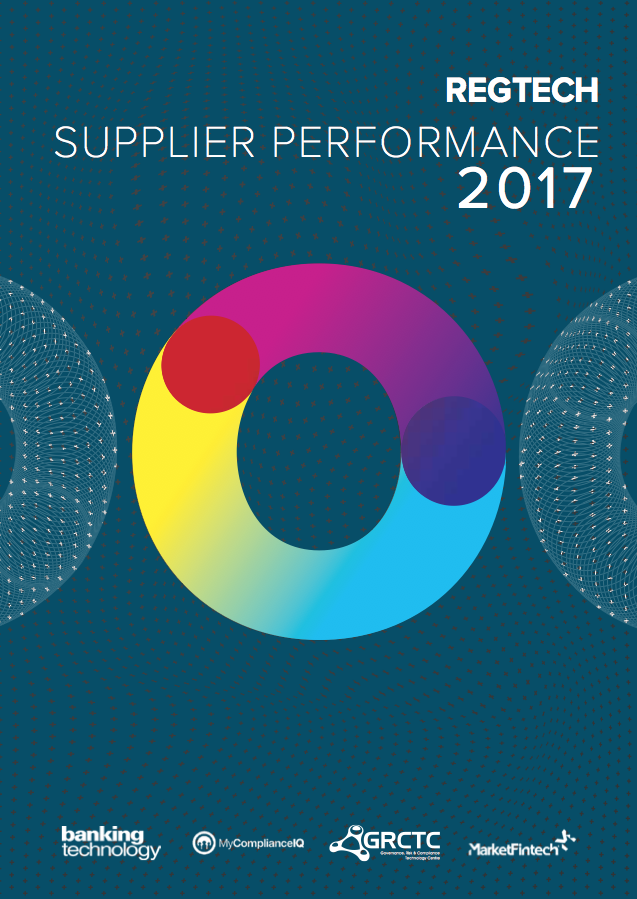 The second edition of Regtech Supplier Performance Report, featuring some 50 regtech suppliers, published by Market Fintech Limited and supported by Banking Technology, says that with over 50,000 regulatory documents published across the G20 since 2009, and an average of 45 new documents every week, we must assume that the future of banking will be driven by technological developments.

MiFID II alone has generated 30,000 pages of regulatory text. The complexity of the task facing these practitioners in understanding and interpreting the volume, variety and velocity of regulation and capturing this knowledge cumulatively and systematically is nothing short of daunting.

As MyComplianceIQ points out “ignorance is no longer bliss – in fact, it just became a criminal offence. And, no matter how much an organisation invests in technology to address areas of its financial crime framework, it will always be the presence of employees who really understand the subject matter that will make the difference between a control that is effective and one that is not”.

A significant hurdle for compliance teams is how they justify the investment spend in new technology to senior management and prove to their seniors that the cost/benefit equation will actually work. Furthermore, given the maturity of these solutions, how do they assess start up viability or where and how to adopt the RegTech within the organisation? We are seeing some positive initiatives being introduced by regulators and financial institutions in the form of ‘proving grounds.’ They are allowing start-ups to undergo a test in real-world conditions. So, there is no lack of desire for change.

The report continues its quest to unveil what solutions are gaining market traction and where in the world, what types of institutions are deploying them and why, plus scope of solutions and areas of compliance addressed. The report provides regulatory technology buyers with the required performance data on RegTech solution providers in order to make an informed decision.

Identifying the right players is a first natural step for many organisations when making a major purchase decision. And up until the introduction of this yearly report, there has been no resource that accomplishes this in any factual way. In addition, many of these regtech solution providers are privately held, and privately held companies aren’t required to report their revenue publicly and revenue is not broken down by product.

Presenting the report’s finding, author of the report, Tina Snelling of Market Fintech, says: “With much industry investment, we’re all keen to understand the adoption of regtech solutions, and up until the introduction of the Regtech Supplier Performance Report, there has been little factual information on whether they are a safe investment. The regtech innovators detailed in this report, between them, offer an impressive range of solutions to many of today’s regulatory challenges and they represent what’s real in regtech today. This second edition continues on its mission to reveal what types of institutions are buying what solutions, what they are solving and why.”

JWG doesn’t necessarily think so. “The main internal barriers are the delivery challenge of linkage between complementary regtech solutions (as a major selling point to senior internal stakeholders), internal adoption and a culture change within the firms to work in a different way.”

CUBE goes further than this: “Regtech brings with it a new breed of technology; cloud based, data rich, scalable applications that are designed with compliance transformation in mind and rapid time to value – the entire vendor engagement, both sourcing and delivery model needs to adapt to this new way of thinking to be able to derive the full benefits that the regtech opportunity brings.”

Ian Chester, director at Message Automation, says “financial institutions need to take a strategic approach rather than tactical responses to each regtech solution.”

Where will we see the next major regtech innovations?

Ben Richmond, founder and CEO of CUBE, predicts: “Through what’s happening in the world of regtech and artificial intelligence (AI) we are building more and more data sets to learn from, this will undoubtedly lead to much greater levels of automation via machine learning and smarter robotic decision making to drive out costs and reduce risk of non-compliance.”

Marc Murphy, CEO of Fenergo, agrees: “Robotics and AI will be used more and more to support and expedite the KYC & KYC review/remediation processes with the key drivers being cost, efficiencies and time.”

He continues: “Currently, banks spend tens of millions of dollars on remediating tens of thousands of legal entities and natural persons as per their risk rating/profile. However, to be compliant, many banks are forced to outsource this process. Today, the only response to this process is to add more people (what Fenergo calls ‘brute force’) to conduct the reviews. Robotics and AI, coupled with an intelligent regulatory rules engine, will speed up this process without the need to add additional labour.”

Stephen Ufford, founder and CEO of Trulioo, thinks that, “today’s increasingly digital world is transforming how we engage and transact online. The ability to quickly and reliably verify an identity is crucial – particularly for financial institutions – hence the rise of regulatory technology. Regtech is enabling financial services providers to meet ever-changing compliance requirements in an innovative and agile way, while simultaneously reducing manual tasks and processes, as well as the cost of compliance.”

What will the future hold for regtech firms?

Jan Hagen, MD of RFS Financial Crime says that, “for technology to enable companies to transform their business, it requires a vendor that truly understands the challenges faced every day by senior executives in the industry. The future leaders in regtech are the ones that truly understand financial services and see tech as an enabler. Not just as a shiny new toy that gets VCs and private equity firms excited.”

How does the report rank the suppliers?

The report authors have developed a custom formula that was used to rank the solutions in the overall ranking and for each category and section. The formula is based on year established, number of users, global deployment, and product go-to-market dates.

Please fill out the brief form below to purchase the Regtech Supplier Performance Report 2017.

By filling out this form you agree to share your details with Market Fintech Limited.