Mobile contactless transactions in the U.K. topped £370 million (US$476 million) in the first six months of 2017, a whopping 336 percent year-on-year increase, according to the latest transaction data from payments processor Worldpay.

Although the use of mobile devices to make in-store payments has been growing steadily since the U.K. launch of Apple Pay in 2015, Worldpay says it’s really in the past 12 months that the technology has begun to take off beyond “early adopters.” The launch of Android Pay in 2016 and Samsung Pay earlier this year has helped boost takeup.

“Mobile spending has shaken off the novelty tag, and is breaking its own spending records virtually every month,” says James Frost, U.K. CMO, Worldpay. “Granted there’s still some way to go before we start cutting up our cards and chucking away our wallets, but it’s easy to see why everyone from startups to tech giants is eager to have a stake in the technology.”

Spending on all forms of contactless systems now accounts for 38 percent of all noncash transactions in the U.K. Total contactless spend in 2017 reached £9 billion (US$11.6 billion) up to June, compared with £10 billion (US$12.8 billion) throughout the whole of 2016.

Supermarkets and grocery stores continue to dominate the mobile tap-and-pay market, accounting for 55 percent of total spend so far in 2017. Londoners still spend the most on their mobiles, but the proportion of transactions concentrated around the capital has dropped from 32 percent at the end of 2016, to 28 percent in 2017, as adoption becomes more widespread across the U.K.

London-based Worldpay announced on Aug. 9 that it has agreed to a $10.4 billion merger with Vantiv. The combined company will operate under the name Worldpay. 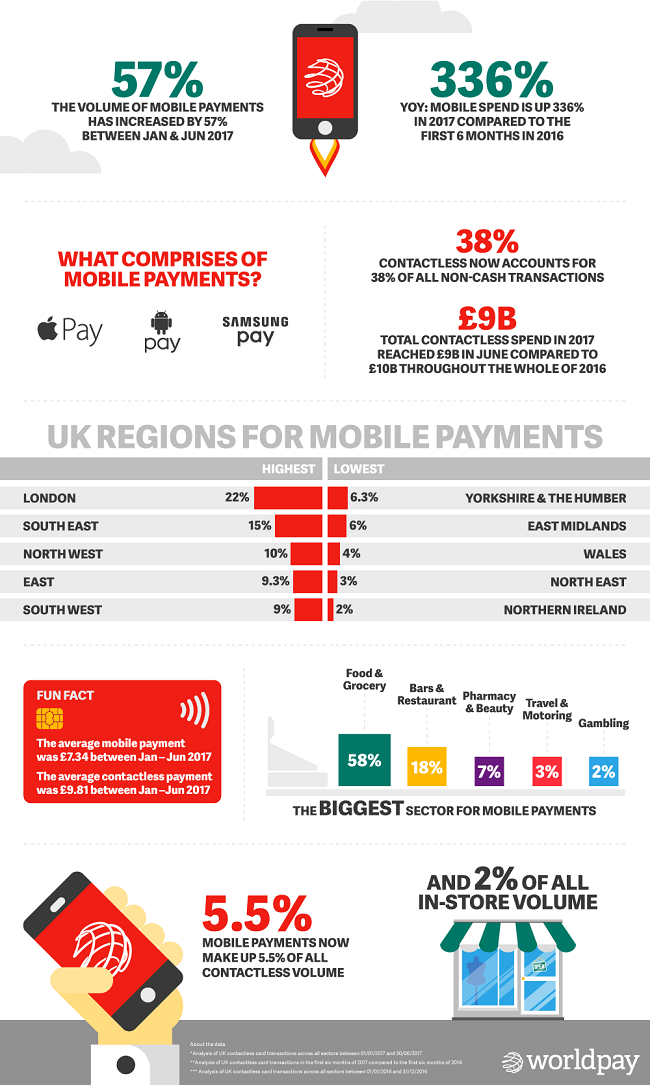