But what about the human cost of automation? 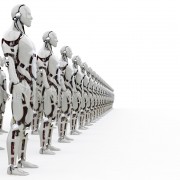 What about the humans?

New research from recruitment agency Robert Half has outlined the jobs which are under threat from automation, but when are we actually going to talk seriously about the dark side of artificial intelligence (AI), asks Telecoms.com (Banking Technology‘s sister publication).

Now we’re not talking about Arnie coming back from the future, blowing up buildings and dropping memorable one-liners, but every step made towards a more efficient AI application is another step for someone towards the dole queue. The replacement of humans by machines is nothing new, but this revolution is one which is seemingly going completely unnoticed by governments around the world.

According to the survey from Robert Half, respondents believe manual data entry tasks such as financial modelling (41%), generating financial reports (40%) and project management and reporting (38%), will be automated within the next three years. As a result, more complex jobs such as payroll (37%), financial planning (33%), accounts payable (38%) and accounts receivable (32%) are the one which the respondents believe will be impacted by 2022.

At the top end of the business, 87% of executives have recognised the positive impact that the growing reliance on technology holds for organisations. This is all well and good, but it isn’t their jobs which are facing the axe.

The argument here is automation of the more mundane tasks will free up an individual to do more complex and proactive jobs within the organisation. In the boardroom this will be viewed very positively as wages can be spent on jobs which are more driven to improving efficiencies making money for the company, but what about those individuals who are not qualified to do anything aside from the mundane roles within an organisation?

While many of those performing the mundane tasks have aspirations for more in their professionals lives, some will not have the education, credentials or experience to perform these newly created jobs. The majority of the time, jobs which are being created are not for those which automation is replacing. Someone who today performs the task of manual data entry is unlikely to be a candidate for the data scientist job which is created through automation. That’s a role which take years of university, in theory, or at the very least, a few years’ experience in interpreting and actioning insight.

This group of people may soon find themselves out of work, and unqualified in the digital community, but officials are either being too short-sighted to realise this, or do not want to acknowledge the difficult truths of progress.

Now we appreciate not all of these individuals will be unqualified for other jobs, and not all of these roles will be automated, but let’s just say 10% of the full-time administrative employees fall into both categories. That’s 220,080 people that are out of a job. And we’re only talking about administrative roles which are under threat. What about drivers (947,000) or mobile machine operators such as crane drivers (139,000), people who work in procurement (56,000), insurance underwriters (35,000), financial analysts (189,000) or how about town planners (20,000)? Not every job will be automated, but aspects of every job can be automated. There will be a lot of people out of employment.

Now we’re not saying progress should be halted, more that a wary eye should be cast over the technology. There are training schemes constantly going on, but not enough to cover the hordes of people who could find themselves very unqualified in the near future.

Some might argue this is a pessimistic view in light of a revolutionary technology which has the power to make lives better. But unless governments start taking the negative impacts of artificial intelligence much more seriously, the bill which will be faced supporting a potentially large number of technologically-forced unemployed will be astronomical.

As mentioned before, this is not something which is new. Industrial and manufacturing revolutions of the past have displaced huge numbers of people and employment, but these movements happened over a considerably longer period of time. Adoption of technology is growing exponentially, meaning the adaptation curve of previous generations is going to become a lot steeper. Unless training and upskilling happens on a much larger scale in the very near future, there could be a lot of people about to experience the painful side of progress.