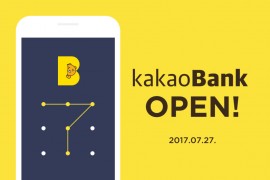 Kakao Bank, one of South Korea’s first digital only banks, says it has attracted KRW 535 billion ($477 million) worth of business in deposits and loans in just four days since its launch.

It has also attracted 820,000+ customers, and its mobile app has been downloaded nearly 1.5 million times.

The bank says its performance has far surpassed that of its rival K Bank, another digital only bank launched around the same time as Kakao Bank.

Kakao Bank is backed by a domestic internet company, Kakao Corp (the provider of the country’s most widely used digital messenger platform Kakao Talk). Tencent and Ebay have also invested in the start-up bank.

Both banks enable account opening via the app – without visiting a bank branch – using a mobile phone number and an ID.