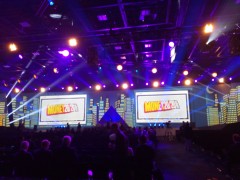 Are trends eclectic for artificial intelligence (AI)? Perhaps not as the fintech world is getting more imaginative and calling for the machines to negotiate on behalf of less-than-objective humans.

At this morning’s (26 June) sessions at Money20/20 in Copenhagen, the themes of AI use cases in financial services and fraud were discussed.

A question from the audience asked would it be OK to let chatbots negotiate Brexit. Good one.

The view was favourable from the panel. In fact, Patrick Mang, innovation lead, global markets, HSBC, gave an example that women, in his opinion, start at a disadvantage in salary negotiations. So if an AI negotiated on their behalf, this would ensure fairness.

While all this is theory, I am seeing at many events the greater interest and creativity in the use of AI.

Away from future dreams, there was the question of real examples.

Jason Mars, CEO and co-founder of conversational AI platform provider Clinc, believes AI “can melt away the pain of financial services”. An example would be for a trading platform that would respond to voice commands, thus removing all the key strokes. Mars was a keen exponent of voice-powered AI.

For Mang, he cited HSBC’s work with a government lab in Hong Kong. The specific example is an image recognition model for handwritten Chinese characters that was deployed for change of address forms. Mang says this showed 90-100% accuracy rates. While this is just one small instance, the concept can be rolled out to more models and uses over time. 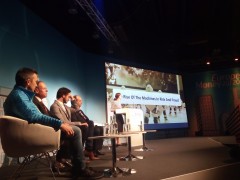 As AI is being constantly developed, the panel felt algorithms need to be designed in a responsible way.

Clara Durodié from the Cognitive Financial Group says: “Algorithms have parents.” The child analogy worked well with the audience. If a parent doesn’t teach ethics to their children, what hope do these youngsters have?

This issue of accountability cropped again as if AI is offering advice on investments, someone has to carry the can for any mistakes.

For this, Durodié was clear: “We need to playback the system from the beginning. Interrogate the system and find out what happened down the line and its reasoning.”

After this, there was another panel on the “rise of the machines in risk and fraud” – the stats show fraud is rising and Johan Gerber from Mastercard notes: “Fraudsters won’t have the same amount of data we have – and this will be an arms race for a while”.

It was a lively and intelligent panel, but no one ever really solves or discusses the AI versus job losses argument. Our population is rising and while machines are kindly doing the manual tasks in the fintech space, there are not enough new jobs being created.

The last word for AI should go to Pedro Bizarro, co-founder and chief science officer at fraud prevention firm Feedzai: “AI is the new electricity, not oil. It will run in the background and we won’t think about it.”

The above was just a glimpse of the many panels running simultaneously at the event. However, the morning, in the huge hall of the Bella Centre, belonged to all and the keynote speeches. 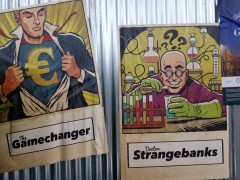 The theme at this year’s event is Superheroes – such as pictures of “The Gamechanger” or “Doctor Strangebanks”. A clever nod (or KAPOW!) to those Marvel and DC comics in terms of style and imagery.

(If I wanted to add my own – “Sulk” – as in a person who throws a strop when we don’t write the fintech story they want. Or even “Invisible Woman” – such as the latter panel on AI – where only the moderator was female.)

There were interesting speeches in the morning from Barclays, BBVA or Rabobank, but the star was really Jack Dorsey – of Square and Twitter fame.

Dorsey explained how Square is being more open in its platform – simply so it can reach larger customers more easily. While this may invite the competition in, he believes this means Square can focus on its core qualities.

Square’s goal is for all objects to disappear in the payments process. There should be no cards – which means “more people can participate”. Like many others, he says there should be a “focus on the experience not transactions”.

Finally, he gave advice to any budding entrepreneurs in the crowd.

“Don’t focus on the ‘what if’. Just do it, so you are moving faster to answering the questions.”

Dorsey believes people can be attracted to an idea but they “need something tangible and something to play with”.

If only the interviewer had asked him if he can do something about all the spam accounts on Twitter. That place is a hot mess.

There will be more reports from Money20/20 later – as Banking Technology is here for all three days.