Money20/20 Europe: Asia in the ascendant 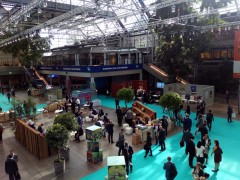 Denmark took a back seat at Money20/20 Europe as the lively fintech scenes in China and India fell under the spotlight with a wealth of information and stats.

By way of recap here in Copenhagen, on the first day (26 June), the uses for artificial intelligence (AI) managed (incredibly) to touch upon Brexit. Yesterday’s (27 June) sessions looked at how the second Payment Services Directive (PSD2) is creating more questions than answers; and how APIs can be advanced to a happy place.

Today (28 June), a morning was devoted to Asia as a variety of firms showed off their data and insight.

To kick things off, Zennon Kapron, director at research firm Kapronasia, looked at digital influences in China and “the way that 1.5 billion people pay, shop and save”.

In terms of smartphone penetration, there is 76% in China. But yet if you look at PC ownership it stands at 50%, according to Kapron. By way of comparison, the US has 85% for PC ownership.

He also cited its research via interviews with 1,000 millennials in China. 60% expressed happiness with their bank, but 85% did point out that their bank offered services no different from any other bank.

Chinese mobile users are also willing to give up privacy for financial gain. 45% of people interviewed said it was OK for Baidu to reveal their search habits. In fact, Kapron pointed out that in Alipay’s terms and conditions, it says it will share data with “partners”. With no details whatsoever about who those partners may be.

You may ask, and Kapron did, why care about China?

He believes that what is happening to banks over there is “classic disruption and could happen around the world”. The Chinese also have “light regulations” and have adopted a “wait and see approach”. Lastly, he warned that “you better understand about Snapchat”. Up to you if you want to take that advice.

After China it was onto financial services in India with Laurent le Moal, CEO at PayU and Naspers Fintech.

According to its research, global fintech funding is slowing down, but yet out of the top seven fintech unicorns, six are from China and India. “Shift happens” – as he neatly explained. In India alone, le Moal says there have been 500+ fintech firms launched.

He also cited the developments in India’s UPI – this is the Unified Payments Interface launched last year by the National Payments Corporation of India (NPCI) – with plenty of banks now using it.

Le Moal also referred to Aadhaar – a 12-digit unique identity number issued to Indian citizens. As Banking Technology reported in March, IDFC Bank launched an e-payment app, IDFC Aadhaar Pay, designed to work with this innovation. According to Naspers, one billion people have enrolled in Aadhaar over the last five years.

It was not all positive noise, as he did note that India suffers from credit access problems and only ten million people use credit cards. Areas potentially open for change and for firms to move into.

Today (28 June) is the final day of Money20/20 Europe and there will be another report from the show later.