Criminals turn their attention to online fraud in the US 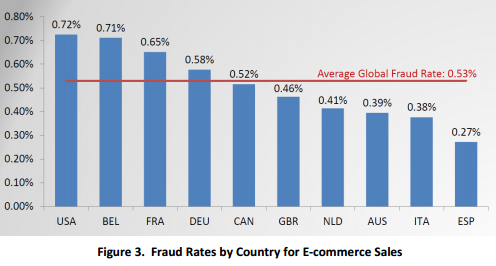 Criminals have deepened their focus on U.S. online transactions since the country’s October 2015 EMV liability shift, with card-not-present fraud (CNP) expected to hit $6.4 billion in 2018, according to a new report from the US Payments Forum.

The shift of fraud from EMV-secured payment terminals to online transactions and other CNP purchases was an expected outcome, at least in the short term, after the liability shift. But the report, “Card-Not-Present Fraud around the World,” gives a clearer view of how fraud might happen in the coming years, and also offers a global look at how criminals are operating.

The U.S. EMV shift is helping to drive down fraud rates. Card-present fraud will decrease to about $1.77 billion in 2018, down 30% from 2017, the report said. Most of those losses will stem from counterfeit cards. By contrast, CNP fraud comes from lost or stolen cards, the report said.

Those CNP losses are encouraging merchants to consider and deploy better security measures, the report said, citing survey findings from Aite Group. “50% [of merchants] believe that tokenization has a high or very high impact on fraud and data security issues, and 62% believe that behavioral analytics have high or very high impact,” the report said. Already, the report added, 44% of merchants use tokenization, which involves a unique code for transaction confirmation that criminals cannot replicate.