CFPB Stares down another D.C. Challenge 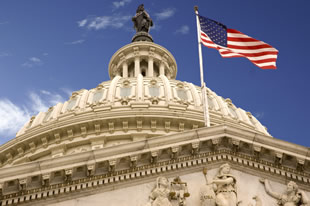 The CFPB and other independent federal agencies would have to submit regulations annually to a White House office under a proposal approved by the U.S. House of Representatives. The bill represents the latest push to reform the CFPB and otherwise reduce regulatory burdens for the financial and payments industry under the Trump administration.

HR 1009 mandates that most independent regulatory agencies would be put to White House review for any “significant regulatory action” so that the executive branch can, for instance, identify redundant, unjustified, “inappropriately burdensome” or other types of rules.  A summary of the bill from Congress.gov defines “significant regulatory action” as rules that “have an annual effect on the economy of $100 million or more,” is inconsistent with action taken by another agency or which meets similar factors. The review would come through the Office of Information and Regulatory Affairs, which is part of the the Office of Management and Budget, or OMB. The bill was introduced on Feb. 13 and sponsored by Rep. Paul Mitchell (R-MI). HR 1009 has gone to the Senate, where it was referred to the Committee on Homeland Security and Governmental Affairs.

The CFPB, in fact, also may fall under a recent executive order from President Trump that directs the OMB “to propose a plan to reorganize governmental functions and eliminate unnecessary agencies (as defined in section 551(1) of title 5, United States Code), components of agencies and agency programs,” according to a blog from Barbara Mishkin at the CFPB Monitor, which is published by Ballard Spahr LLP. “Section 551(1) defines ‘agency’ as ‘each authority of the government of the United States, whether or not it is within or subject to review by another agency,’ with certain exceptions that do not include independent regulatory agencies.”

That said, any plan to kill or “substantially restructure” the CFPB would require Congress to amend the Dodd-Frank Act, which created the agency and dictates much of its internal structure, according to Mishkin.

Other Challenges to CFPB

The House and OMB action comes at a challenging time for the CFPB. Last month, the U.S. Court of Appeals for the District of Columbia Circuit said it would grant the CFPB’s request for an en banc hearing re-examining the court’s October 2016 ruling that the CFPB is unconstitutionally structured because it’s an independent agency led by a single individual who can only be removed by the president for cause.

Although the court’s decision to rehear the case is a win for the CFPB, the agency still faces uncertain waters. President Trump has targeted the Dodd-Frank Act—the law that created the CFPB—as a major culprit in what he has characterized as over-regulation that has curtailed economic growth. Though Trump has not commented specifically on the CFPB or head Richard Cordray directly, he has said he’s planning on “cutting a lot out of Dodd-Frank.” The president also met with former U.S. Rep. Randy Neugebauer before taking office, about Neugebauer potentially replacing Cordray at the helm of the bureau.