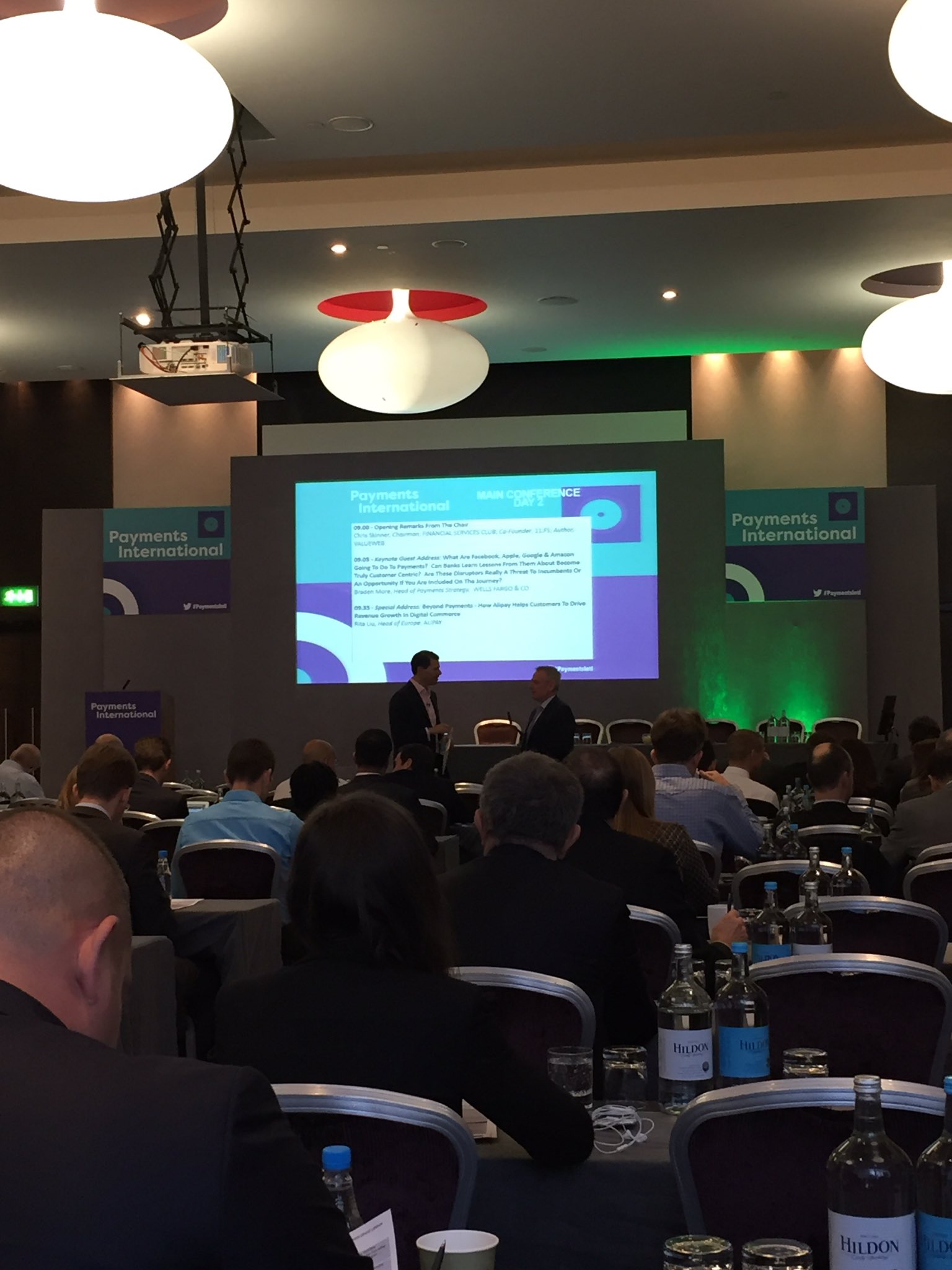 Banks need to show courage and radically change their traditional mindsets about payments if they are to deal with start-ups threatening to snatch a share of the spoils.

This was one of the messages from Payments International in London – a four-day conference of panel debates, Q&A and presentations – that runs 15-18 November. It’s worth pointing out that an initial poll showed that 42% of the audience worked in retail banking; and that 68% were at a Payments International event for the first time.

At yesterday’s (16 November) sessions, one roundtable looked at “global drivers for change in payments” and the opportunities and challenges involved.

The moderator, Ruth Wandhöfer from Citi, began the discussions with five polls for the audience and panel of four bankers.

In terms of what keeps them awake at night, 32% of the delegates said dealing with new technologies. When it came to the greatest threat to banking – 32% (again) said “new entrants”, who could “eat their lunch”.

As with all these fintech shows, regulations are causing people lots of headaches. When asked about the main effects of regulations on banking performance – 54% said they increase complexity and costs. Lots of anxiety, but nothing in the industry is changing.

When it came to the banks’ focus on reducing costs – the choice of re-engineering the payments process just shaded it with 31% of the vote. It was also reasonably tight when asked about what is holding banks from optimising payments. Around 37% said the complexity of their internal business structures.

The last question asked about digital payments versus cash, and the challenge to get client adoption. The result was clear – with 56% saying that end-user preference came out top.

With the audience participation over, the first three bankers on the panel all said the same thing – they don’t lose sleep over new entrants. The usual reasons were given. Such as an “opportunity for collaboration”. We’ve all heard that before.

However, the last panel member to speak, Mark Buitenhek at ING, stole this part of the show with jargon-free comments and insight – such as joking that “my biggest fear is we are all bankers and we all think the same”.

He said that “we need to radically think differently” and that the “people who built ships didn’t build planes”. A watertight analogy that flew well with the crowd.

Buitenhek said: “It is very hard to take a step back and stimulate your people. If we make mistakes the regulators will come to us and they would hold us back. The biggest challenge is to navigate through these events and people need to show guts to let go of current revenues.”

He also notes that around seven years ago, transactional banking was seen as “great” and they were told to “keep on going”. Now all this has changed as times are much tougher.

The panel also looked at data analytics, and Richard Martin at Barclays, noted that years ago market research was done with a person and a clipboard. Now all this has been replaced by automated data analytics tools.

And as Buitenhek noted, no one complains about a credit card hack warning from their bank – and all that is based on data.

Elsewhere, there were fine talks by Chris Skinner (who has recently joined consultancy firm 11:FS) and Professor Stéphane Garelli from IMD business school. The former speech I’d heard before at another event, but was still enjoyable second time round. The latter talk was new. It was also very witty and delivered at breakneck speed.

Skinner offered some interesting stats. In Africa, 82% of people have mobile connections, compared to last year’s figure of 68%. Payments is powering on and plenty more potential on the continent.

Everyone knows about the digital days/daze, and Skinner reckons by the end of the decade that the average human will have seven digital things – e.g. phone, tablet etc. With seven billion people on our planet, this potentially means 50 billion digital things will be in existence.

Garelli’s ultra-fast talk had the audience very entertained. A lot of it was about economics in 2017, rather than fintech, but there were some notable points. One concerned the S&P 500 list, where in 1958 the average life of a company was 61 years, yet in 2011 it was 18 years. This ephemeral state of affairs is also apparent in the world of fintech.

While not every aspect of their words concerned payments or fintech, no one minded. An event should be about learning and also being entertained.

Part 2 of our event review will follow later today (17 November).