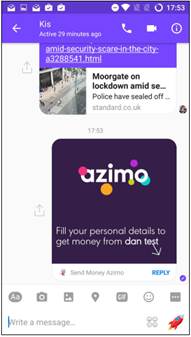 Michael Kent, Azimo: Sending money should be as easy as adding a friend on Facebook

It connects senders and receivers through their Facebook friend list, enabling them to exchange details immediately and links them to the Azimo app to make a transfer, “all within a few simple clicks”, the vendor says.

It is available on Azimo’s iOS and Android apps and supports ten languages.

“The solution creates a seamless two-way interaction, where the recipient is in control of entering their bank details or choosing one of over 270,000 collection points around the world, directly within the app,” Azimo explains.

Michael Kent, CEO and founder of Azimo, says sending money should be as easy as adding a friend on Facebook. “With 250 million migrants around the world sending over $600 million dollars home every year to family, friends or businesses, the new feature creates an unprecedented shared ownership, putting the receiver in as much control as the sender.”

Azimo claims to have created “the world’s largest digital money transfer network” since its launch in 2012. Its HQ is in London and it has offices in Krakow, Poland.

RT @volantetech: #ISO20022 is not regulatory mandated, but the opportunities it provides means that a bank can deploy a series of robust an…

The Monetary Authority of Singapore (@MAS_sg) has completed its fifth and final testing phase for a multi-currency… twitter.com/i/web/status/1…