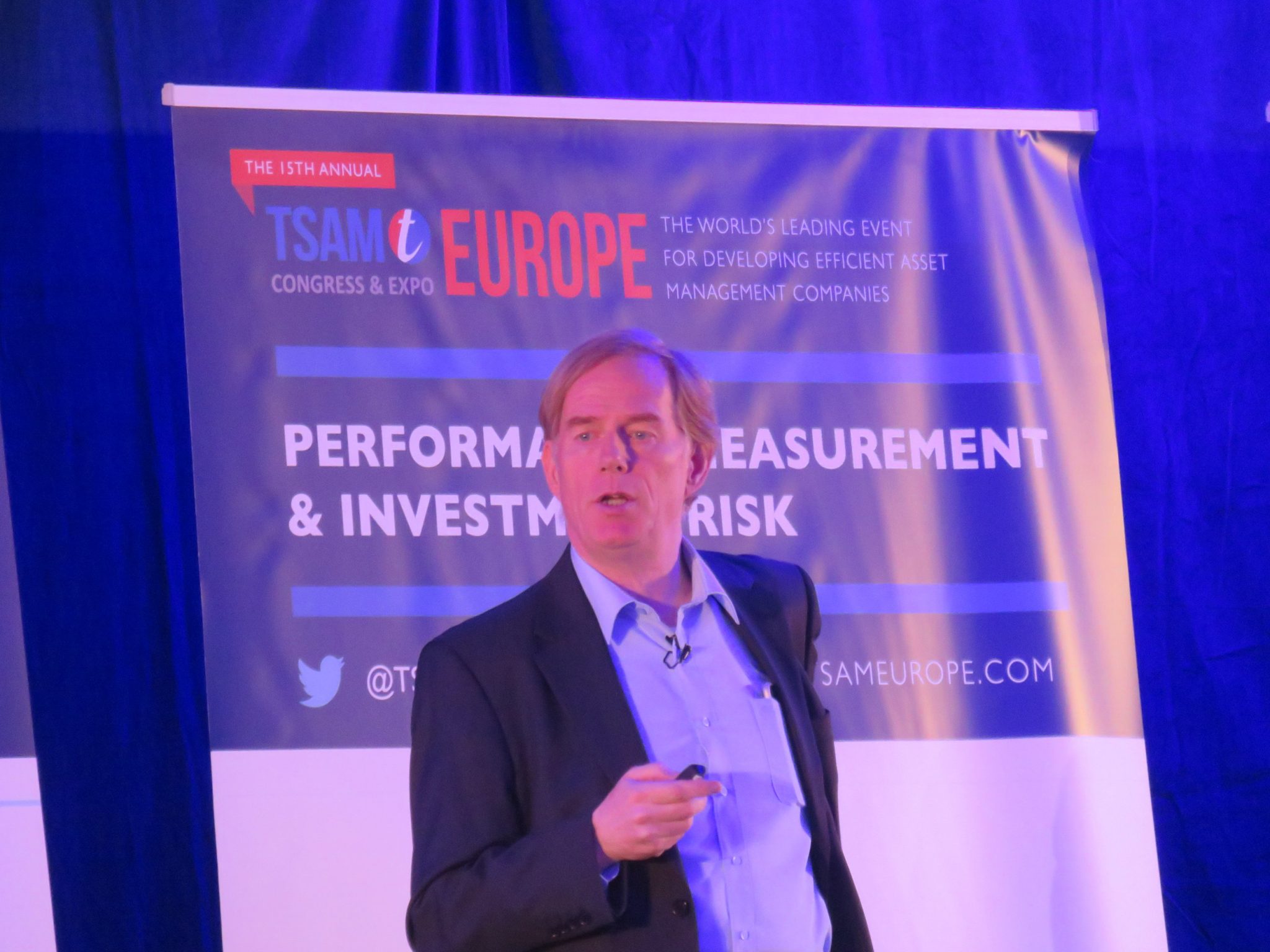 It was a sense of déjà vu at TSAM (The Summit for Asset Management) 2016 in London yesterday (15 March), as the industry still says it is facing a “tsunami of regulation”.

The event brought around 300 delegates, vendors and speakers to London’s Lancaster Hotel. All there to network, and discuss trends and issues in the asset management sector.

Six streams ran simultaneously and Banking Technology was present to report on some of them.

In his keynote presentation “The elephant on the footpath – anticipating industry disruption with future tech”, Wood says in terms of disruption, “we are in the third machine age – as machines are replacing human creative effort”.

The rise of AI in banking is well documented and the message is that the use of technology has to be grasped by TSAM’s audience.

The speech covered a lot of ground, and for cybersecurity Wood felt that in the past security threats had been hyped up by the experts. “But in fact, the experts were right.”

Blockchain got a mention, and he says, “frankly I’m not sure what it can do” (honesty is appreciated – Banking Technology is sure a lot of people in the industry are thinking the same but are afraid to say it!).

But he adds that it is important to separate blockchain’s potential from bitcoin. The former’s underlying technology is “very sound, and genuinely valuable and innovative”.

Whether delegates will heed these calls for action, is something to watch.

A brush with Basel

The “tsunami” phrase has become a cliché to some, yet in a keynote panel discussion – “Regulators, regulations and the endeavour to keep your company compliant” – it reappeared.

Angus Canvin, senior advisor, regulatory affairs at The Investment Association, says on a general level the industry seems to be “in a tsunami of regulation for a while” but no one had opinions on how to stop this or whether this will really change.

Some regulations are necessary of course.

He says Basel III will have a “way forward soon” but “it will happen at the last minute as it always does”.

Bland also told the delegates their “business models should drive what regulations should achieve”.

Ronan Brennan, CTO at Accudelta, was an excellent and open moderator, and tried to enliven a panel discussion on “getting data to the right part of the business at the right time”.

He says: “It gets frustrating talking about the same thing, but the industry is a little bit immature about data handling. It should treat data as more valuable and I find it disheartening that I don’t see many CTOs [in the asset management sector].”

Brennan wanted the panel to share their insights on challenges and solutions.

Nothing specific or particularly memorable was mentioned, but Andrew Barnett, head of investment data, Legal & General Investment Management, says (unsurprisingly) the company recognises the value of data and “every single element of change is monitored”.

For Janos Varga, data developer, River and Mercantile Asset Management, it is a case of “running quickly” with deals and queries. Get a proof of concept first.

He says: “You want to fail earlier and so you can succeed earlier.”

At present, Burden says data management can be like “herding cats”.

There were other panel discussions attended but for brevity let’s skip to the final session.

One of the final streams was a “fireside chat”. (A real fireside would have been welcome as the rooms were generally freezing thanks to the air conditioning set so low.) 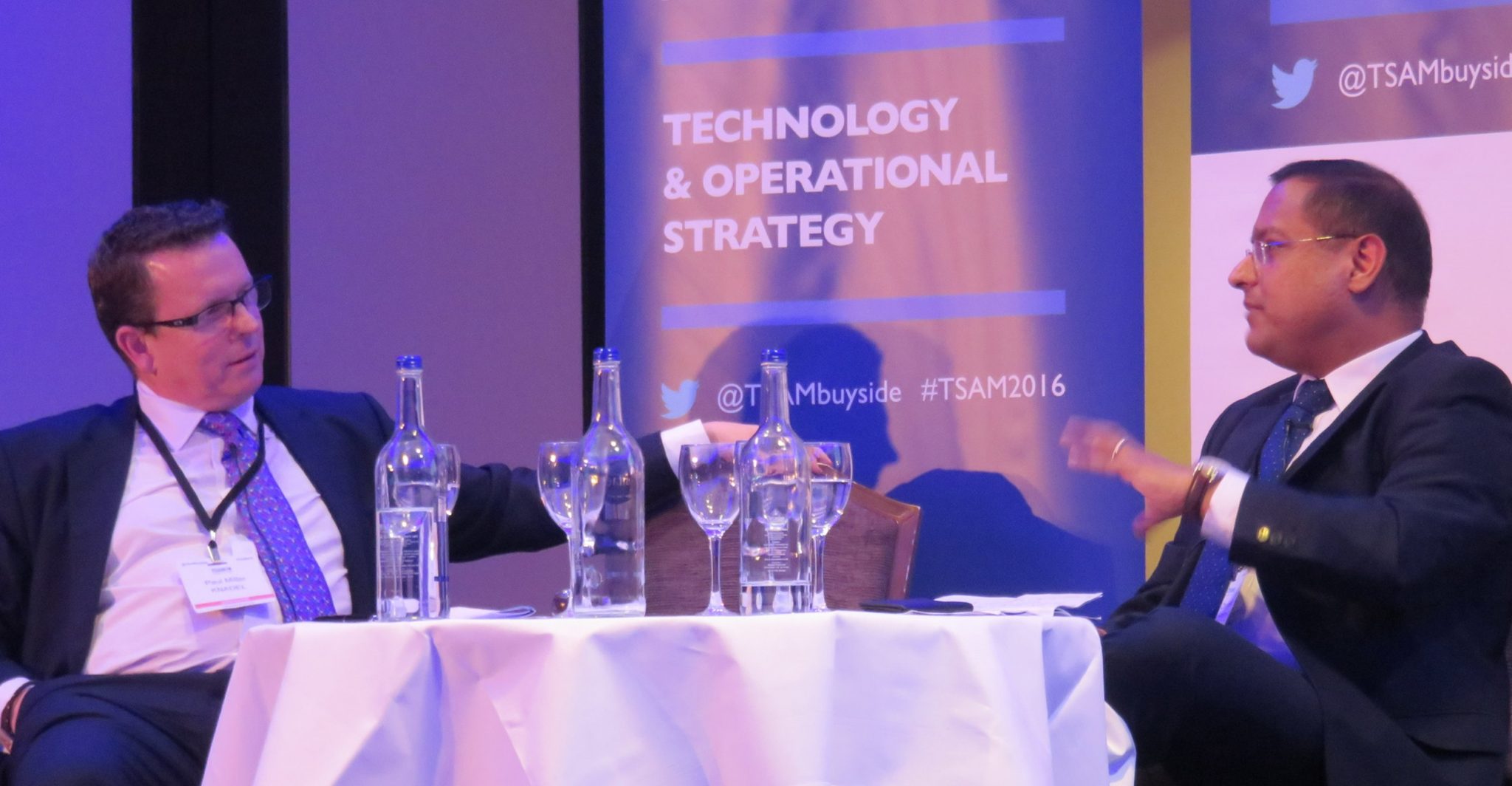 The discussion was on “How much of a threat do the technology giants Google, Alibaba and Facebook pose to fund management leaders?”.

The moderator, Paul Miller, director at Knadel, was another fine host, and spoke with Vipul Chandna, head of business solutions, Sarasin and Partners.

Chandna notes that the industry enjoys a healthy 30% margin and while there is “a lot of competition”, no one lowers this margin.

It seems this margin could make the sector ripe for innovation and the entry of new faces.

Because TSAM’s audience have to deal with so many regulations, Miller says that they “save us as the cost is so high”. It could be the industry’s saving grace from big players moving in.

Miller asked the audience whether the tech giants are put off by the high cost of regulations to enter this field. 95% of the audience said no.

No reason was given or explored for this, but perhaps Google, Alibaba and Facebook would have the finances to manage such costs, or the willpower to overcome them. The big three are very successful and any challenge is not a deterrent, but something to overcome.

On to blockchain (again) and Chandna sees it as a “game changer” and specifically mentioned New York-based R3 CEV’s trial of five distinct blockchain technologies with 40 banks.

Chandna says that blockchain needs to be “controlled”. Whether that’s something like the DTCC, is a “possibility”.

He says blockchain’s adoption will not be quick – it may take 15-20 years – and he points to Swift, where “adoption is not uniform” even after all these years.

It was a good discussion and wide-ranging, but there were a lot of questions and not enough time to take them all.

Wood (one of the speakers from the morning) was in the audience and gave another insight: “Disruption will creep up on us, and will not be head on.”

The event was a success.

Nothing revolutionary or revelatory was discussed but as a chance to network and build brands, the companies benefited.

Everything worked well and when meeting the vendors and delegates, no negativity was encountered. If they thought it, they didn’t say it.

The panel discussions were brief and generally didn’t drag on. Their expertise was evident and exemplary.

Quite a few speakers looked to encourage and challenge their audience. Their words were not just platitudes.

Will those listening take such words on board? We’ll see next year.