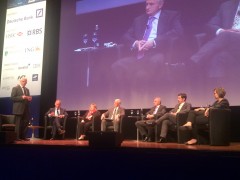 The window of opportunity to harmonise international real-time payments implementations is rapidly closing as plans for domestic systems move ahead.

While cross-border real-time payments are some way off, many industry participants would like to harmonise their implementation approaches as much as possible. “Individual jurisdictions are implementing idiosyncratically – we need collaboration,” said Richard Dzina, senior vice president at the Federal Reserve Bank of New York, during a session at the EBAday conference earlier this week.

“I just don’t think we have enough time,” said Paul Thomalla, SVP global corporate relations and business development at ACI Worldwide. There is a need to “get some standards damn quick”, he said. “The issues are at the business layers, rather than the nuts and bolts – who’s going to do the sanctions?”

Session moderator Kevin Brown, an independent non-executive director and advisor, said “successful collaboration creates fertile ground for collaboration”, a view that panellists were in general agreement with though some expressed doubts about practical issues.

“Standards imposed by regulators are a crude lever to achieve something that is quite subtle,” said Martin Coen, chief executive of payment systems vendor Dovetail. The more people involved in the standards process the more exponentially the time to get things done increases.

Dizna said that the US bodies “have a strong commitment that new services will be ISO 20022 compliant”. This was echoed by another panellist, Eileen Dignen, senior vice president at The Clearing House, who said: “We should at least start with the standard and keep it as consistent as possible. It will be ISO 20022; it opens the door.”

Dignen said that despite the deadlines, progress is being made in the US. “We don’t have a regulatory mandate, and don’t really have a business case – but by the time of Sibos [in October] we will have a statement of direction.”

Late last month a group of 40 international clearing houses, banks, vendors, payments associations and other parties met in London at a roundtable organised by the UK Payments Council to discuss these issues, which resulted in a proposal to establish a Real-Time Payments Group under ISO 20022 governance on an international basis. Since that meeting the ISO 20022 Registration Management Group has confirmed support for the proposal.