Branches could blossom as transactions move to digital channels 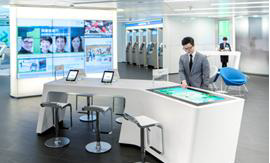 Banks are continuing to spend money on branches, but they are dramatically changing their role to become centres for sale-oriented advice rather than service-oriented transactions.

According to new research by Ovum, The Impact of Digital Transformation on Bank Branches, the growth of mobile is accelerating the shift of banking interactions from physical channels to digital ones – a shift reflected in new figures from the British Bankers’ Association and EY that shows mobile and internet banking is now being used for transactions worth nearly £1 billion a day in the UK, according to a major industry-wide report into consumer-friendly technology by the BBA and EY.

The second of the BBA/EY Way We Bank Now report series – titled It’s in Your Hands – also shows that millions of customers are using contactless cards, payment by mobile and SMS balance alerts. In 2014 the rate of adoption of digital banking has grown strongly with more than 15,000 people downloading banking apps a day.

“Digital banking is really shaking up the market, driving competition and innovation. The British public’s adoption of digital banking has reached critical mass this year and we believe the UK has a unique opportunity to achieve a leading position in digital banking,” said Tariq Khatri, EY partner, digital financial services.

But the BBA says that the industry is still committed to the high street, pointing out that 2,274 bank branches have been refurbished in the past two years.

According to Ovum, this is driven by banks’ “desire to cultivate greater levels of loyalty and profitability from their customers, with the in-store experience a key differentiator”.

With improving economic conditions, organisations realise they cannot grow by solely cutting costs and need to look at new revenue opportunities, says Ovum, citing research that shows branches are the third highest investment priority for banks, behind online banking and mobile banking respectively. Another recent Ovum report predicted that spending on branches will rise by 3.44% annually on average between 2014 and 2018.

“For many banks, the long journey of branch transformation is just beginning. The first steps will involve rearranging stores. This will take inspiration from retailers, who are experts at the science of sales-driven store design,” said Jaroslaw Knapik, senior analyst, financial services technology, Ovum. “With people unlikely to sign-up for new products and services after queuing, making customers relaxed throughout the experience is key in transforming branches. This will occur alongside a focus on increasing efficiency, including reducing headcount and the installation of express banking terminals.”

A successful branch transformation project requires the right technology, says Ovum: “Consumers now expect banks to have a seamless, single view of them. Banks on the other hand, want to sell to their customers in a more informed manner, meaning they need consistency and unification, something CRM integration technology enables. Staff must also be supported by technology in new branches, with services that speed up processing of queries critical.” Video technology can also play a key part in transforming stores, as it means specialists can hold dialogue with consumers wherever they are, reducing costs and improving customer experience.

“It is key for banks to increase customer intimacy in branches, as this can lead to greater customer loyalty and profitability. They should invest more in enhancing the customer experience, in turn creating a sustainable model for the branch network of the future,” said Knapik.