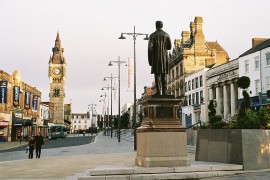 Darlington Building Society is to install a new enterprise risk management solution Ten Risk Manager from Hitec Laboratories, which It says will help the society to identify, manage, monitor and report on risks.

The society said that its decision was prompted by the regulatory requirement under the FCA to ensure that it has adequate systems and controls in place to manage risk.

Based in the north-east of England, Darlington Building Society was established in 1856 and serves customers in County Durham, the Tees Valley and north Yorkshire. The society has 17 branches and employs 160 staff. Its assets under management stand at about £600 million. It is also unique as the only building society that is also a housing developer through its subsidiary Darlington Homes.

Darlington itself is famous as the end point of the world’s first publicly subscribed passenger railway, the Stockton and Darlington railway, which opened in 1825. The town is located north of York but south of Durham and Newcastle.