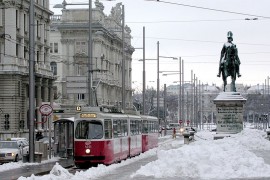 The order routing service is designed to act as a link between every party in the buying and selling of funds, no matter where they are, what messaging system they are using and how large their firm. Calastone claims the benefits of its service to Semper Constantia are improved STP rates, faster migration, reduced operational costs and the freeing up of resources for other more productive tasks.

The Vienna-based bank is Calastone’s first user in the country. Semper Constantia was founded in 1986, and focuses on investment funds, wealth management services and custody. The bank has until now used connectivity mainly in line with ISO 15022 via Swift.

“With a selected client base of wealthy individuals, enterprises, private foundations and institutional clients, much of its transaction processing has been traditional as the business felt it did not warrant the time and cost to implement numerous links,” said the bank.

By using the Calastone transaction network, Semper Constantia will be able to continue to support ISO 15022 messaging via a single link to Calastone while withdrawing their own ISO 15022 link in favour of the more modern standard. The funds network says that users will be able to see the status of their transactions via execution management system. Meanwhile, the bank can use the network to connect to counterparties, whether these use Swift, ISO 15022, ISO 20022 or any other message format.

The Calastone network itself has been designed not to favour  any one particular connectivity option or format – a stance calculated to boost the amount of possible interactions on the system. The firm markets its services on the basis of their ability to help automate fund order processing, theoretically freeing up clients to invest their resources in other tasks.

“We are thrilled to be working with Semper Constantia, who realised the value added of using Calastone and welcome them as our first Austrian distributor,” said Isabell de Wit, manager, European sales at Calastone. “Hopefully as the market recognises their foresight in automating their order traffic, others in the region will take up our services as we strive to enable more widespread STP across the funds industry.”