PFM: looking after the pennies 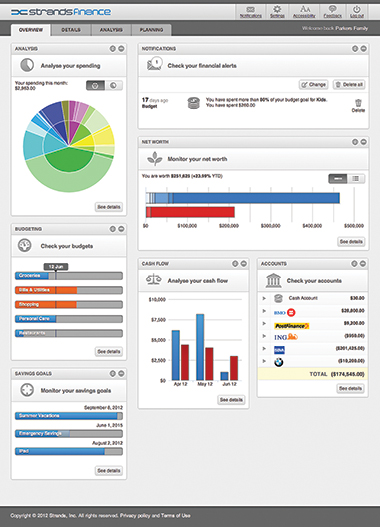 PFM tools will be a weapon in retail banking loyalty wars

Personal financial management tools have spluttered in and out of fashion, but a combination of mobile, tablet and internet banking uptake may mean their time has come.

Recent years have seen the emergence of a plethora of PFM tools, each of which purports to be the best way to keep track of your finances. Some of these services are view-only; others also allow users to make payments and transfers. Some are owned by large banks such as Bank of America; others are smaller independent operations such as UK-based Money Dashboard.

So, how to choose between them?

Last Month, Yorkshire Building Society launched personal financial management through a deal with technology provider eWise. The new system allows customers to view all their accounts in one place, and includes tools for monitoring, viewing transaction data, categorisation of spending and income and the creation and management of budgets.

The YBS tool is a useful illustration because it has many characteristics that are common to virtually all services. One of the best-known online personal financial management tools, Mint.com, was established in the US in 2006. As of February, the service claims to have 10 million users. On Mint, users can set up email and mobile alerts to help keep track of bills and stay within reach of their financial objectives. Mint is free to use and is available both online and as a mobile app.

In the UK, Mint has been emulated by Money Dashboard, a free account aggregation tool that is designed to bring together UK customers’ current, savings and credit card accounts. Updated daily, the dashboard provides simple graphs to track where users are spending money; it can also show predicted future spending patterns. Outgoings are grouped into categories such as clothing, transport, household, going out and so on; likewise, income is grouped into employment, benefits, credit received and other categories.

The company’s business model does not charge users for the service; instead it recommends financial products and services to its user base. If the customer chooses to use a product from a partner, Money Dashboard earns a referral fee. Money Dashboard is based in Edinburgh, and was founded by entrepreneur Gavin Littlejohn in 2011.

Some providers have gone a step further and added the ability to make payments and transfers. In the US, Pageonce offers the ability to pay bills and track all a user’s accounts in one place. The tool covers credit card transactions, bills and payments and sends users alerts about important items such as bill due dates, overdrafts and suspicious activity to help them stay up to date with their finances. Users can also keep track of their frequent flyer miles, rewards, mobile minutes and mobile phone text and data usage. Founded in 2007, the service currently claims to have 7.5 million users.

Users can also combine their online banking with Quicken money management software, using Quicken Direct Connect or Web Connect, to allow them to transfer funds and make payments. Quicken is made by Intuit, the same company that owns Mint.com. The Bank of America service is free for the first three months, then $9.95 per month. Business customers pay $15 per month.

As with online banking tools, personal financial management offerings face a challenge to convince customers that it is safe to submit their data. In December 2012, news emerged that a criminal scam known as the Eurograbber attack had stolen £30 million from more than 30,000 accounts across 30 banks in four European countries, using malware that affected both PCs and bank customers’ mobile phones. Other incidents, such as an attack using UK bank NatWest’s mobile banking app in September, were smaller but also widely reported.

View-only services Mint and Money Dashboard both use 128-bit encryption. However, firms that cover payments and transfers may use higher bit encryption. US mobile payment service Venmo uses 256-bit encryption, as users are effectively selecting their friends from their phone or email contacts or from Facebook, and then using the service to transfer funds.

To differentiate themselves from the competition, some personal financial management tools are targeted at very specific segments of the market. For example, Kiboo.com is a US-based firm that aims to understand young people and help them to manage their personal finances, using online and mobile tools and social networking features. Kiboo focuses on users aged 15-22, and includes tools that let users set goals and share them with friends and family, as well as tips, advice and community discussions on topics such as how to earn money at school, as well as how to give back something to society, for example through supporting projects to provide clean drinking water in developing countries.

“There is a disconnect between young people, the way they socialise, and the banking industry,” said Lisa Halpern, chief executive and founder of Kiboo. “That divide centres most of all on communication. We are building a community where young people can have their first interaction with real money in an environment that is relevant to them.”

Other firms are attempting to turn the problem on its head, by making personal financial management an integral part of the banking experience itself rather than offering it as a separate service. Finland-based start-up online bank Holvi is currently planning to roll out across Europe with an entirely online banking service that combines elements of personal financial management with elements of online communities such as Facebook or Moneybar, the social network for investors.

On Holvi, users are able to create different profiles for different purposes, such as running a business or organising a wedding, and can use Holvi to set targets and manage their budget. Users can also create a shared account and start group discussions. The idea is to create a more community-led approach. Users will also be able to buy and sell services directly from each other, such as learning to speak a new language or sports training, through a kind of iTunes-style store.

Holvi is using Nordic banking group Nordea as its correspondent bank; Nordea will provide the transaction banking infrastructure the company needs to complete its planned pan-European rollout by the end of the year. The company has said it will not attempt to build the entire banking infrastructure itself. Instead, it is keen to partner with other firms so that it can focus on building the customer interface. Nordea is also providing Holvi with the APIs that it needs to connect the front-end that the customer sees, with Nordea’s underlying core banking systems.

“We’ve re-thought every aspect of what an account is,” said co-founder Kristoffer Lawson. “Traditionally banks offer everything in house – investments, cards, everything. But that model doesn’t recognise the changes the internet has brought. Much more nimble companies like Wonga and Nutmeg are eating away at the core bank business. Our plan is to be part of that wave, and to partner with the transaction banks to provide a far superior user experience to the siloed systems of the past.”

Similar offerings include Moven, formerly known as Movenbank, which consists of an entirely online bank that will enable users to pay their friends with Facebook, withdraw cash from ATMs and deposit cheques using a smartphone. It will also include personal financial management tools to help users “stay in the black”. Moven even includes a personality test, designed to help users see whether they are more ‘rockstar’ or ‘accountant’.

With the introduction of seven-day account switching expected to usher in a period of more intense competition in the UK this September, expect to see more banks rolling out personal financial management tools in the near future.