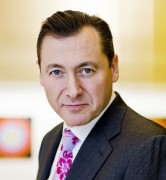 Wagner: retailers aren't going away, but they have to change

Dan Wagner is pretty sure that he has an idea how the use of mobile devices will play out in the commercial world and how the relationships between banks, merchant acquirers, merchants and customers will change.

He’s been pretty sure about things before, so it might be worth paying attention. Back in 1984, Wagner set up MAID – Marketing Analysis and Information Database – one of the first online database services.

A decade later, the company was listed on the London Stock Exchange and had offices in New York, Paris and Los Angeles. It also had deals to supply data to Microsoft for MSN, and with CompuServe, IBM and British Telecom.

In 1997 it acquired Knight-Ridder Information in a $420 million deal that created the world’s largest online retailer, merging the US company’s Dialog database with MAID. In 2000 it was sold to Thomson for $330 million.

Getting information online these days is, of course easy. If you want to know more about Wagner’s colourful career, a reasonable place to start would be to type the phrase “serial entrepreneur” into Google. A 2007 article in the Daily Telegraph uses the phrase twice in the first three paragraphs.

For the past few years, Wagner has been involved in the world of e-commerce through Venda, a company that he set up in 1998, originally as a subsidiary of MAID, and which provides e-commerce solutions for TK Maxx, Tesco and others.

Amid a scattering of other ventures, his main interest these days is Powa, another e-commerce platform, and mPowa, a subsidiary that is developing and manufacturing a mobile payments solution for the point-of-sale.

There are, of course, other mobile PoS devices, notably Square and iZettle. The US Square device, introduced by Twitter co-founder Jack Dorsey, was an inspiration to Wagner, he says, but it is flawed by the fact that it uses the magnetic stripe on the card rather than the EMV chip and pin standard. “When I saw the Square device, suddenly it crystallised how to move the online world into the physical world,” says Wagner. “It isn’t appropriate anywhere else in the world.”

The iZettle device is even worse, says Wagner, as it involves the retailer physically handing over their smartphone for the customer to key in details. In the real world – particularly the world of the small retailer – he thinks this is unrealistic. “Who, on a market stall, is going to hand a $500 smartphone to someone buying a pair of cut-price jeans?” he asks.

The mPowa pitch is to close a gap between banks and infrastructure players, the payment processors and the retailers. Square and iZettle are about card-enabling those retailers that currently can’t afford to take cards, or work in environments where existing terminal aren’t practical. “This is not intended for the new-to-card vendors,” he says. Instead he sees a market for the mPowa device among the existing infrastructure players, replacing current PoS systems with far cheaper mobile devices. “Banks and others are going to have to build systems, or they could buy from us,” he said.

Essentially, it is a white labelling play for a small – cheap – EMV card reader that has a Bluetooth link back to a mobile device, which acts as a portable PoS terminal. Consumers are comfortable with their cards, and the card schemes are well-entrenched. In fact, Visa and MasterCard have both said that they see a blended future for cards and mobile devices acting as a card replacement.

Behind his thinking is a belief that things are changing in the world of commerce, and traditional retailing is under threat – the UK has seen the disappearance of several high profile retailers in the past few months, with Jessops, HMV and Comet all exiting the scene.

The big difference between the modern physical retailing environment and online shopping, is that in the latter case, anti-intuitive as it may seem, the consumer has a more personal relationship with the vendor and vice versa. Amazon’s recommendation system, flawed as it undoubtedly is, is still a more personal interaction than wandering around a large department store.

“The fact is that retailers with a physical presence don’t know who their customers are, whereas online they know exactly who you and can therefore serve you properly. Retail is a dumb environment,” says Wagner.

Even so, he continues: “retailers are not going away, but they have to change, and

who is best placed to effect change in a physical retail environment? I’d say it is the e-commerce provider, because they are running all the other channels.”

In the future, retailers will be assisted by technology, blending the technologies of e-commerce and data analytics in the retail environment (just as has been talked about in retail banking for some time).

One step at a time, however. The next stage for mPowa is to manufacture the card-reading widget, which is so cheap compared to existing devices that Wagner expects many of them to be simply given to retailers by the payments or point of sale vendor. “It is a fifth of the weight, a third of the size and a eighth of the cost of anything else that is out there, so it is dramatically cheaper and more portable,” he says.

There are several things that make the mPowa approach different, he says. “The first is the ubiquity of acceptance – it will take cards from anywhere in the world, either mag stripe or chip and pin. The second thing is that we are not interested in the new-to-cards market like Square and iZettle. Those Tier 5 retailers are not well served by the banks, because there isn’t any real volume – they prefer cash, pretty much.”

A third difference is that mPowa has set up its infrastructure to be white-labelled by banks and partners. “The people that are most threatened by this whole revolution are the people who provide the acquiring services – people like HSBC or Barclays, but not Square,” says Wagner. “They are serving the merchants that have bank accounts with them, but they do not understand what it takes to provide mobile apps and provide APIs to connect all the mobile devices.”

It is into this space that Wagner is pushing mPowa. “What we are doing for them is providing an infrastructure to extend their reach. I said that banks are going to have to build that capability or lose out, and decided that we would build it for them and provide it to them. We are competing with the people that make the till systems and the card readers – VeriFone and Ingenico.”

In a market with lots of new, unknown and, ostensibly, exciting players, Wagner seems to be positioning mPowa as the known – he emphasises the infrastructure behind it all, and the lack of disruption that his solution involves, rather than the disruptive nature of the technology., which is much-beloved of its exponents.

It’s certainly a different approach – and worth watching.