The courage of our convictions

I was a very timid child. 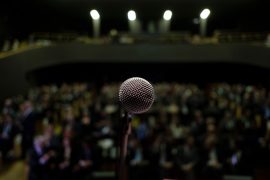 When it comes to your convictions, you need the courage to stand up for the thing you know is right

Yeah, I know it’s hard to fathom. And yet here I am and here we are.

I was shy. I was introverted.

I still am. I just decided long ago that being an introvert exacted too high a toll in terms of life experiences. Opportunities. Friendships.

And justice. Because silence doesn’t fight your corner, it turns out. Waiting for the world to see, unaided, doesn’t play out well in real life, it turns out.

So I learned to be a very different way: so that the things and people and situations I encounter don’t miss me. Don’t pass me by. I learned to act like an extrovert so I don’t miss out.

‘Have the courage of your convictions,’ my mum always said.

If you know the answer to the question the teacher is asking, say it in a loud, clear voice.

If you want to be included in something, ask, don’t hope.

If you know what’s right, stand up for it.

If you know you are right, stand up for yourself and stand your ground.

Sounds easy. But for a timid child, it was hard work. And not always helpful work, because the world doesn’t value courage the way my mama does. But it was hard work that was also important work even when it felt like it came back to bite me occasionally. So you continue doing it, because the alternative is not worth considering.

That doesn’t make it less hard.

And maybe the fact that to me all this grandstanding is hard is why I cannot for the life of me fathom all the posturing and passive aggressive gaslighting that goes on in every office. And given your overwhelming response to the gaslighting piece I published a few weeks back, here we are, back by popular demand. To ask the hard question of why the hell.

And the defence comes with fervour.

Once they warm to their subject, muscle-memory kicks in. They have the courage of their convictions, those chaps. They are loud and proud. It’s their truth against yours.

I always wonder: do they have to convince themselves first?

Do they, by the time they take the floor and act all wronged and impassioned, believe their own excuse? Is that how it works?

Or do they know it’s nonsense but put on a show because… I don’t know… they’re extroverts?

They are not shy. Au contraire. They like this. The oratory and maybe even the confrontation. Is this a game to them? A bit of fun?

I don’t know the answer and part of me doesn’t care to know.

But sadly, I don’t think I get to indulge in that.

Because, you see, the whole thing about the courage of your convictions goes hand in hand with accountability for your actions.

The boss says we should kill a project because it’s not working.

You stand up and say no, come on now. We agreed on a timeline. We knew this would take time. And we are 70% into that timeline. So yeah, it hasn’t worked yet but it wasn’t expected to. It was meant to. Our leading indicators are good. We should just do as we agreed.

We agreed. We talked about this. We considered and decided and now is time to hold firm.

This is where your colleagues who are not like us will start shouting… whatever. They will be in favour of killing the project, in favour of something entirely different with even longer timelines. They will see an opportunity to jump into the limelight and will take it.

Someone will suggest we go back and do the very thing we agreed to stop doing when we started this project. Someone will say the reason it’s all not working is that you and your team are s**t (not in those words, of course). Nobody will discuss whether the leading indicators are strong enough or whether the context had shifted enough to warrant a change in strategy unless there’s another one of you in the room.

So the debate isn’t an exercise in forensic logic. It’s an exercise in oratory, flamboyance and getting senior mindshare as the issue will go, Solomon style, to the level up for adjudication.

The boss decides to kill the project (or ask you to come back with an update so incredibly soon as to amount to the same thing). So it dies. And in a few months you are in a very similar meeting where nobody remembers advocating killing the project but everyone is pointing a finger at you because… didn’t the competition just go and do something very similar to that project that nobody remembers killing… and ‘where are we in all this?’ and ‘isn’t this your responsibility?’ and so on.

The fun we have.

The second thing that may happen is the boss doesn’t kill the project. They honour the pact. You carry on doing the work. And it either succeeds or you get to a point where the leading indicators aren’t so green and suddenly, you hit a snag. An oversight, a mistake, a miscalculation or changing market conditions.

Or do you go in with the courage of the conviction that doesn’t say I must win at all costs, but rather says we must win, and I now know a thing that changes what we previously believed to be true so here I am: truthful and open but also accountable for the outcome we were striving for.

Will you double down defending ‘your thing’ or will you stay true to the pact and say we are still within the timeframe and the leading indicators are showing us a different picture and here are our options?

We all know what will happen when you do this. Some will jeer the perceived flip-flopping. Some will see it as weakness. You will be made to feel like, somehow, you are not of the team right now. You are a saboteur. Who misled them. Intentionally. Like, somehow, you knew the future and kept it to yourself. Or, even worse, you did this on purpose.

And as the banal and predictable madness unfolds, you find yourself thinking: who even thinks this? And then unwelcome but loud as day, the follow-on thought of… someone who would do this. That’s who thinks of this.

So that’s the deal.

When it comes to your convictions, you need courage.

When it comes to your actions, you need accountability.

And when it comes to the people who lack both, you need nerves of steel and more than a little courage.

Because this is where you stand up for the thing you know is right.

And you do that because it’s the right thing to do.

But also, let’s face it, you do this because you don’t know any other way to be.