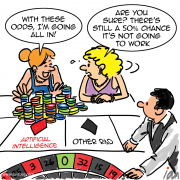 “All in” by Ian Foley

According to the report “Retooling R&D for a New Era”, the top areas for innovation have been digitalising processes, sustainability and AI. However, there now seems to be a focus to shift resources around AI and machine learning.

For example, both Meta and Google have announced cuts to their virtual reality programmes while shifting resources to AI projects. In the US, the Federal Government increased R&D investment in AI projects by 9%. Even during the current hiring freeze, there are still 5,700 job openings for AI and ML in Silicon Valley alone on Indeed, the recruiting site.

All this is helping to accelerate mainstream adoption, with Gartner saying that “innovations including edge AI, computer vision, decision intelligence and machine learning are all poised to have a transformational impact on the market in coming years”.

However, there is a growing concern about whether AI is sufficiently replicable and can become scalable. Researchers often make dramatic claims that cannot be tested because they do not disclose their algorithms. According to the State of AI report, a recent review found that only 15% of AI studies shared their code.

Gary Marcus, a writer in the field of AI, warns: “If and when the public, governments and investment community recognise that they have been sold an unrealistic picture of AI’s strengths and weaknesses that doesn’t match reality, a new AI winter may commence.”