Mojaloop: the open source software powering payments for the unbanked

For so many of us, transferring money is no big deal. With our smartphones and banking apps all available in the palm of our hand, sending money has never been easier.

But according to World Bank, there are 1.7 billion people in the world living without access to the most basic financial services, including having their own bank account.

Kim Walters, senior managing director at Crosslake Technologies, tells FinTech Futures: “If you live in a village in Tanzania and you want to send money to your mother in Kenya, you go to an agency to transfer funds.

“And we’re not talking about big amounts – we’re talking $20, which can enable her to eat for several months.”

She adds that with those agencies claiming a 50% markup on the transferred money, the only viable means left for people to transfer is by courier.

With three decades worth of experience, the majority of which spent at Microsoft, Walters got involved in the Mojaloop project, which looks to solve this problem predominantly in Africa.

Backed by the Bill and Melinda Gates Foundation, Mojaloop is an open source payments platform with a mission to drive financial inclusion.

Walters credits the idea for Mojaloop to the foundation, which she says prefers to be “technology agnostic”.

“They say here’s the vision, you guys can go engineer it.

“My role in it was to be the lead engineer to figure out the components of this system and the founding members to develop it,” she adds.

Funded by the Bill and Melinda Gates Foundation, Walters and her team partnered with Dwolla, a financial payments service provider, which built the central ledger and some of the core administrative features for Mojaloop.

Then, they tapped Ripple, which built the inter-ledger protocol, which essentially enables mapping out addresses and routing payments.

Their third partner was Software Group, based out of Bulgaria, which helped build the user interface (UI) and the front-end interfaces. And lastly, they brought in ModusBox for its APIs, transfer agents and payment systems.

Starting out in 2016, the four companies came together with Walters directing the team and worked for two years to build out the ecosystem. In 2018, they finally took it to the Bank of Tanzania to start the pilot programme.

“One of the things we had to do is think about the lowest common denominator,” Walters explains, which turned out to be people not having smartphones. They discovered most people in the country have traditional older flip phones, called Unstructured Supplementary Service Data (USSD) phones.

“What we had to do is bring it down to a USSD interface where it’s simply a menu-driven UI,” explains Walters, “where option one allows you to open an account, two to check your balance, three for deposits and four to transfer money.”

From an accessibility standpoint, Walters says that they made sure there was a “repeatable set of parameters” people can use where they can just enter the same thing every time.

She adds that since they had simulator phones to test out this technology, it wasn’t the most difficult part of the process.

“The most difficult part of it really was designing the hub system, which is basically the routing and dealing with transfers,” she says.

“The principle behind it was we wanted to support thousands and thousands of transfers per second, with a very fast transfer speed, and very little overhead costs,” she adds, “because we knew that the payments that would go through would be of $10 and $20, but we didn’t want to have any maintenance fee and as little overhead as possible.”

Mojaloop’s software is currently deployed in two African countries. In Uganda, Orange, a telecom operator, and MTN, a mobile bank network, entered a joint venture in 2020 to launch Mowali, which leverages the Mojaloop open source technology.

And in Tanzania, the Bank of Tanzania has transactions going through the Mojaloop platform.

When asked about customer response, Walters notes that with the whole process, it takes a while to get to the end user, as much of the system is used by hub, mobile and platform administrators. 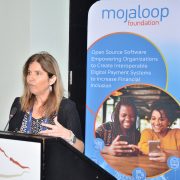 “I think with the buy in from them it’s been really easy to work with Mojaloop because it’s a free open source platform right there,” she says. “We are not charging any amount of money to implement it.”

She adds that for banks, the advantage is that they get access to more potential customers as they normally only have access to users within their country or network.

By implementing Mojaloop, they can have an “exponential” number of customers because of the platform’s reach, she claims.

Listing the benefits of Mojaloop, she adds that in countries like Tanzania, where there are people who have never seen a bank, they can now open a bank account straight from their flip phone.

“Research has shown when folks, especially women, have access to a bank, they are more likely to save for things like housing and health care and education,” Walters adds.

“Especially in some of these countries, women are not even able to open up a bank account because it has all been a male-dominated initiative.”

“I think we’re just careful about not getting over our bridges,” Walters says. “Onboarding Mowali was really the 2020 focus, and with Covid, we just slowed down a little bit.”

But while Africa is the firm’s focus for now, she says that if someone from Latin America or Asia were to approach them, they would welcome the initiative.

“It’s just that we have a fixed amount of resources and volunteers and as such we’re trying not to boil the ocean, but we’re open to it.”

Walters calls the journey an “eye-opening” experience, noting how a lot of things tend to be taken “for granted” in the United States.

“I’ve had the privilege to go to Africa several times and you meet with some of these folks who have experiences about how difficult it is to save money, go to a bank and transfer money and hear about the costs involved.

“It really grounds the experience and makes all the things that you’re building really worth it.”