The day I skipped my recital

I played classical guitar as a kid. 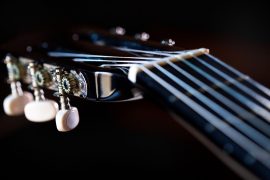 It was precocious beyond belief, all pink bows and long blond hair and a slanted footrest perched on top of five stacked volumes of the family encyclopaedia because my feet couldn’t reach the floor even when the music stool was set on the lowest rung.

And then my music teacher said I should be put forward for a recital.

And my mum was happy and I was happy, I guess, because I had seen recitals in movies and although I understood it was going to be more like a pre-school version of Fame and less like the Carnegie Hall, I was six and everything was exciting.

On the day of the recital, my little friend Michael had a birthday party.

So we went to the party with the intention of leaving mid-afternoon to go… you know… perform Bach.

When the time came to go, a group of five to six kids were involved in a very engaging game of tag with a lively narrative melange of jungle warfare, circus acts and some treasure hunting.

I pleaded with my mum not to go.

I wanted to stay on and play.

My mum didn’t resist at all, though.

I stayed. I played. I remember this golden, carefree day almost 40 years on.

And then the next day came the guilt.

Should I have gone?

My mother wouldn’t have any of that nonsense.

“You do all the things life offers you. All the things our budget can stretch to. You try all the experiences and avenues and art forms and sport that you can reach by stretching your hands as far as our means can go. But you don’t have to do them all.”

“My job is to provide options to the best of my abilities,” she said.

“Your job is to try. And then choose.”

There is one thing even better than finding your vocation in dance or music or whatever, said my mother, and that’s knowing what’s not your calling. Knowing that whatever path you take in life, you are not an undiscovered violin virtuoso, you are not forever deprived of fulfilment because you never got to find your true passion for dance. Knowing what is not your thing because you tried it and didn’t love it is in so many ways more valuable than finding your thing.

Try things, said my mother. Find the ones that you want to keep doing. Find the things that sacrifices make sense for.

Because if you put everything ahead of play, you will never play again.

And if you put play ahead of everything, you will never achieve much.

So what is worth sacrificing play for?

My mother is sadly not available for boardroom presentations and executive coaching but if you are very nice to me, I can introduce you.

The day I missed my recital is one of the most formative experiences of my childhood.

Because when the time came that I willingly skipped parties to revise for my university entry exams, or missed lazy days on the beach to do field work in the depths of Turkey, or missed my friend’s religiously attended Pilates class because I was out of the country more often than not and even when not, who makes it out of the office that early, that consistently? When I did all that, I never felt short-changed. I never felt like I didn’t have a choice. I never felt it was not worth it, writ large.

There have been days when I was not given a choice and that became a data point and a boss to move away from. There have been initiatives and work streams and situations that were not worth it and I learned from it all and did better next time. And by better I don’t mean I performed better. I mean I was more intentional, more thoughtful and kinder to myself.

I have not always made the right choice, but I have always had a choice to make and I knew to exercise it.

Why am I telling you this?

One is simple and straightforward: manage your own career. Make choices. Make the investments needed to pursue those choices.

You won’t get far by not making sacrifices.

But you will not get far by making all the sacrifices either.

The second reason is that, as always, there is a digital transformation parable lurking here.

And it is, unsurprisingly, also… make choices.

Make the right investments of effort as well as money.

Accept that some hard work and some sacrifices will need to be made no matter what you pursue but working hard at many things does not substitute for the need to make choices.

If you do nothing, you get nothing.

If you do all the things, you also get nothing. Just… a nothing made up of little bits of too many unconnected things that don’t add up to much and took an inordinate amount of effort and time and energy. And that’s more depressing than the nothing you get if you did nothing.

Don’t do all the things.

But accept that to do the things that you want to do, hard work and sacrifices sadly are part of the journey.

Don’t expect anyone to regulate how much is too much and when you can take a break.

When I was doing the things that I had decided were important, my mother darkened my doorway very regularly chastising me. To take a break. To go out. To not miss yet another birthday party or day at the beach.

The choice of when to double down and when to take a breather was mine. And the hunger for what was at the far end of the effort made it an easy choice. But a choice nonetheless.

I never really enjoyed playing the guitar, but I have a voracious mind and a lot of ambition. That was my path. And I followed it. Nobody had to tell me to try. Nobody could stop me if they tried.

If you are going to make sacrifices of hard work anyway, make some choices. Make it worth it, when it’s all said and done.