Money 20/20 Europe: A new era for a digital Sterling

What will the UK’s first digital Sterling pilot look like? Project New Era, set to launch in September, is a pilot evaluating the future digital currency ecosystem in the UK with a focus on a retail central bank digital currency (CBDC), with the aim to drive public-private collaboration and real-world testing. 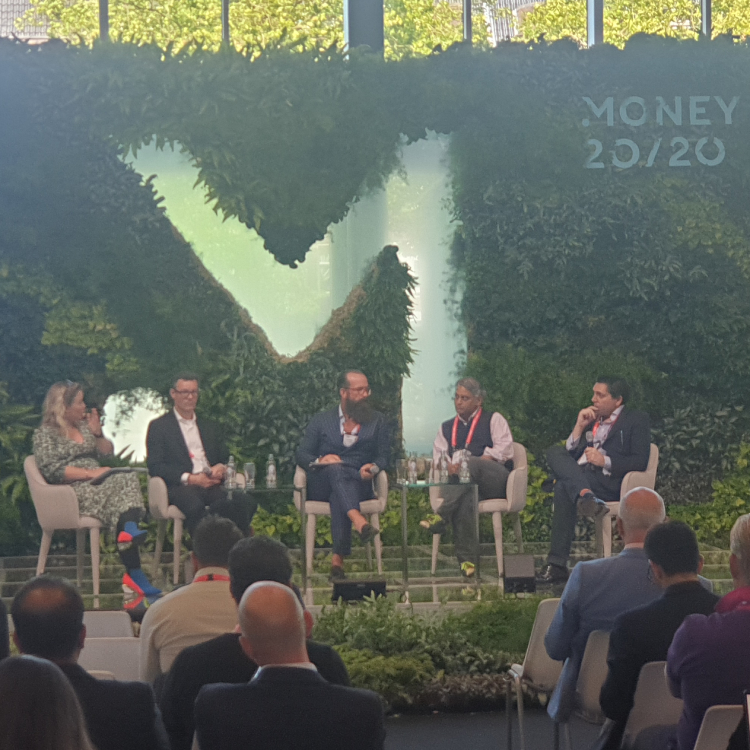 The project is led by infrastructure fintech “paywith.glass” and supported by industry body The Payments Association. Global advisors to the project include Boston Consulting Group as consulting partner, Rosa & Roubini Associates as Macroeconomic Advisors and Simmons & Simmons as legal counsel.

Burchardi from Boston Consulting kicked off the discussion, explaining how New Era is backed by a consortium of different companies, including fintech companies and pure tech companies.

“We are setting up the infrastructure for the digital Sterling, which is a quasi-CBDC,” Burchardi said, with a platform-first approach that is regulator-friendly and able to demonstrate use cases for the dSterling.

“We want to ensure that through use cases we can demonstrate the benefits of a dSterling,” Burchardi added, providing regulators with real data from the private sector.

By leveraging a consortium of “best-in-breed” companies, “we have defined the key requirements and key capabilities that such a platform for a CBDC will require, including scalability and privacy concerns”, Burchardi said.

Burchardi outlined the three design or evaluation criteria for selecting use cases on the platform. Firstly, does it showcase the benefit of a dSterling to the public? For example, payment on delivery, where a customer only pays for an item upon receipt, a process orchestrated through smart contracts. Secondly, does it really test the limits of the platform? And lastly, will it provide data to feedback to the regulator?

On the use cases for a dSterling, PSR’s Wandhöfer noted “we’ve come a long way from the early days of Bitcoin”, adding that a number of countries are either experimenting with or rolling out CBDCs. “But what we have thought about here is much more,” she added.

“This is no longer about payments,” Wandhöfer said, but about bringing people into the digital financial ecosystem through a digital identity, getting access to credit and loans, and other financial inclusion concerns.

Burchardi said New Era is taking a partnership approach with different specialised fintechs and with incumbents such as banks, as well as integrating with different regulators. “As a public-private partnership, I think this is quite different from many other initiatives”.

Wandhöfer added: “Sometimes central banks and regulators take a long time while the industry can do this much faster that – and we need to act now.”

Finastra payments head Olofsson believes that the capabilities of a distributed ledger technology-based (DLT) currency, stablecoin or crypto, “combines everything we talk about when it comes to open banking, it’s a service that combines a capability for cross border payments, it addresses a lot of topics around security”.

“We invest heavily in something called payment orchestration. So, with the existing legacy infrastructure for clearing specified in real-time, we see how the need for orchestration is increasing for banks to be able to monetise their payments,” Olofsson said.

One of the major benefits of a dSterling is that it will spearhead the move into a digitised world where the physical supply chain is getting represented as a digital format. “That gives a great opportunity for banks to start monetising their solutions in a new way, in a more digital way,” Olofsson believes.

FinClusive’s Amit Sharma went on to outline the significant benefits of something like a dSterling when it comes to financial inclusion.

“Our True North, our mission is financial inclusion. And so, we take a unique approach, because one of the things that’s common among the use cases is interoperability and compliance,” Sharma said.

These ensure that there’s an equitable playing field for individuals, households, small businesses and large corporates to get into financial services, Sharma said.

“Our goal is to provide what we call ‘Compliance-as-a-Service’ which is effectively a global ecosystem and full stack approach to compliance and KYC,” Sharma added.

FinClusive is also working to assign digital identity credentials backed by that compliance to ensure that there’s a “utility in the ecosystem”, to enable equitable access for an individual, household or small business that can verify and validate in an automated way.

“Our role in the pilot is to provide that compliance layer,” Sharma said, so that there’s a common framework from both a policy and technology perspective.

Regarding the importance of interoperability, Wandhöfer said “straddling the old financial world and the new one is really important,” and many players have struggled with that.

While still commercial bank money, as a digital currency dSterling will require identity verification and wallet capabilities, for example, “which is very different to the £10 in my purse today”, Wandhöfer mused.

Sharma said that given the fundamentally different technological and operating infrastructure, “we have to have that bridge”.

Doing this requires digital identity solutions, AML and KYC to be embedded in that infrastructure, rather than bolted on, Sharma said.

Regarding the regulatory concerns, Simmons & Simmons partner Irons outlined some of the gaps still to be addressed in the pilot.

He reiterated the distinction between cryptocurrencies, “which are effectively unregulated investments”, and digital currencies like dSterling which will be backed by commercial banks.

Irons said the regulatory framework in the UK already effectively exists for a fiat-backed stablecoin, as an e-money token.

In that context, there may be issues around how it will work in practice, Irons adds, highlighting the HM Treasury consultation response that came out earlier this year, “which has essentially said they’re going to take the e-money regulatory framework and modify it to enable specific payments specific stablecoins to be operated”.

Most of the concerns are around how such a stablecoin will be backed, Irons says. With e-money, you have to safeguard the funds if you’re a non-bank issuer. “There’s been a distinction between how banks are treated and how EMI is being treated in the space.”

There are also issues around liability, Irons believes. “I think the main regulatory bits that people think are missing is really how you make the peg of the stable coin strong.”

“Most of the stablecoins we’ve seen so far aren’t truly stable, with fluctuations even in the USDC. The reason for the fluctuation, the volatility, is because of them being exchange traded and subject to speculation,” Irons said.

“If you’ve got a stablecoin that is fundamentally not stable, and you’ve sold it to someone on the basis that it’s pegged and you will get your pound or dollar back, it ceases to be a reliable form of payment,” he added.

“I think that’s one of the major issues that the pilot will hopefully help to rectify.”