New UK credit-building fintech Pillar has raised £13 million in a pre-seed round to build a global financial platform which provides access to credit for immigrants. 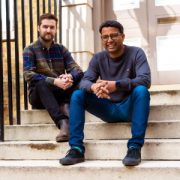 Currently, consumers cannot take their credit file from one country to another, leaving them unable to access credit cards and loans in their new country.

Pillar CEO Ashutosh Bhatt says: “We have set upon building a globally scalable platform that breaks down data silos and credit borders as well as solves this massive problem faced by financially secure people moving to a new country.”

At Revolut, Bhatt says it was a “herculean task” to get credit bureaus coordinated across countries, “they just don’t have the tech to be joined up outside of each region”.

As a result, Bhatt says, a data disparity exists that means people have to start again every time they move to another country. “Our intention is to look at consumers based on their credit footprint globally, not on a country by country basis.”

The pre-seed cash will support the development of the platform as well as building the operational infrastructure to support the company’s international growth plans.

Bhatt continues: “The UK and Europe are just the beginning, we are building out infrastructure in the US, Africa and Asia. It is about time that credit products as well as credit data systems are redeveloped from scratch, there has been no real innovation in the past half a century in this space.”