Now is not the time

“Now is not the time to talk about new technologies,” said the important people, “We just got slapped with a fine over things we knew we needed to do but couldn’t get our systems to do them in a meaningful time frame.” 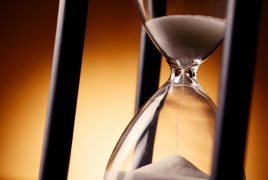 There is no later. Now is the only time.

“Now is not the time to think about our 30-year tech horizon strategy. We are in the middle of a budget cycle fighting over the next 12 months as if the world will end at the end of them, as if we don’t do this every year, the same way, without fail.”

“Now is not the time to talk about talent scarcity. We are discussing our governance uplift commitments and all the things the regulator has been saying we need to do for years and the runway they gave us, that looked ever so long, seems to be running out.”

Are these sentences familiar?

How about the frustration of needing to shout, “Now is exactly the time because all these things are connected, because unless you treat them as connected you will always be playing catch-up and because actually now is the only time we have and we are already late so let’s act before it’s too late.”?

If you are here with me, your face already contorting with silent frustration, you also know that ‘now is not the time’ got a lot of mileage during the pandemic.

First it was a genuine case of, “The house is on fire: our call centres are empty, most of our operations employees don’t have laptops and those who do can’t access a fair chunk of the tech estate they need to do their job. Now is not the time to talk about digital capabilities, a new architecture with the appropriate levels of resilience baked in and a data strategy.”

And if you tried to say, “Actually, those are the things that solve The Thing, the problem you are groaning under,” you probably didn’t get round to it because you were shoved out the way by people saying, “Now is not the time to talk about fully digitising our estate because we need to get COBOL devs out of retirement to update some interest rates on our mortgage platform.”

And then it was, “Now is not the time to commit to long-term planning as the pandemic has shown all we have done to date was half-hearted and inadequate and we are not sure when this thing will end, so now is not the time to talk about resilience and agility, flexibility and adaptability in process and structure, systems and infrastructure.”

It’s mad when you put it down in black and white, isn’t it?

But now it’s next-level mad in that the answer to the problem is in the very sentence used to explain why the answer will have to wait. Why we have to live with the problem. Because somehow having this problem means now is not the time to do the thing that would solve it.

We’ve always been like this, in our industry. None of this is new.

But it is all cumulative. Because every day that goes by when we don’t solve our problems is another day of side-effects caused by endless workarounds to make up for the inadequacies of old systems getting older.

And now there’s a war.

And a supply chain crisis.

And an energy crisis.

And a cost of living crisis.

And a recession on its way.

So now is not the time to think about the future because the present is on fire.

Only, had you done the things you told us ‘now is not the time’ for 10 years ago… and five years ago… or last year even… we would be having a different conversation today and a very different one tomorrow.

So enough with ‘not now’.

We have not engaged with the hard work of digital transformation fully because we hoped that delaying it would make it easier. External circumstances would become more favourable. Someone may crack it and we could just follow in their footsteps as quickly as our legs could carry us.

But if anything, the context got more complicated, the constraints more terrifying and the complexity of the decisions that need to be made more dizzying.

We said not now in the hope that ‘later’ would either be someone else’s problem or somehow less difficult.

And here we are and here it is: definitely harder.

And the world? Well, the world is going to hell in a hand cart and if you were hoping things would be easier in a decade or two circa 2006, you are probably cursing your younger self roundabout now.

There is no later.

Now is the only time.

Now has always been the only time. And every time you say not now you make it all that little bit harder. Not for the next guy. For you. For your future self.

Face into it and start the work. It is complicated and will take a while so you might as well start.

And if you don’t know where to start with it all, start with realising that ‘digital’ is not your app. It’s the connectivity that gives your teams the tools they need to do their job despite the external challenges and in line with the economy.

That means work from anywhere, securely, in real time and with unfettered access to the appropriate systems.

That is what they need to access in order to do what you pay them to. In order to serve your customers.

Getting the customers to serve themselves in an endless loop of poorly executed design choices isn’t digital, by the way.

Digital does not necessarily mean self-serve for the masses.

It means that everything from your pipeline build to your API documentation is designed with three things in mind: speed, security, service.

It means that digital is an inside job. It is about making your organisation faster and lither and better at its job.

And now is the time to start facing into that: into what it entails and what it looks like and what is missing.

And do it now. Before it gets even harder by the passing of yet another day.