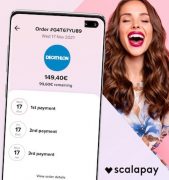 This funding comes as an extension of Scalapay’s $497 million Series B round which took place in February 2022.

The company’s service includes three options – Pay in 3, Pay in 4, and Pay Later – in which merchants can offer buyers to pay in three instalments, four instalments, or entirely after 14 days.

Scalapay says that the new funding will go towards hiring new staff, product development, and brand building. The firm also intends to build out its executive team and company board.

Founded in 2019, the company has raised $727 million in funding to date. It hit unicorn status earlier this year with a valuation of over $1 billion.