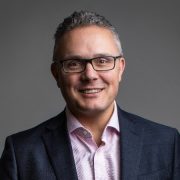 Regnier has more than 15 years’ worth of experience across the sector, having held senior positions at Lloyds Banking Group, TSB and Halifax.

Writing on LinkedIn following his first day in the role last week, Santander’s new CEO, whose appointment was announced in November, says it “is such an important time for our customers, both retail and business, who are looking to us to support them through the challenging times ahead”.

Regnier joins Santander from Yorkshire Building Society, where he was CEO since 2017, and prior to that chief commercial officer and chief customer officer.

He started out as a management consultant at Arthur D. Little in the late 90s before moving to the Boston Consulting Group. Regnier then held various senior roles at retail giant Asda before beginning his long career in financial services at Lloyds TSB in 2006.

“We have a big agenda ahead of us – fostering innovation, digitising our services and continuing to evolve as a sustainable and responsible bank,” Regnier says.

Regnier replaces Nathan Bostock, who held the role since 2014 and will be moving to British multinational energy firm Centrica as a non-executive director, starting May 2022.