What The Beatles can teach us about open banking payment adoption

Why do some good ideas succeed while others fall by the wayside? 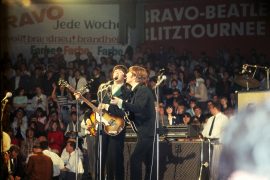 A2A payments could be having their own ‘Beatlemania’ moment

It’s a question addressed by behavioural economist Cass Sunstein (of Nudge fame) in his new research paper, Beatlemania, set to be published in the Journal of Beatles Studies.

Sunstein argues that The Beatles made it because they worked incredibly hard (see Malcolm Gladwell’s 10,000 hours rule in his book Outliers), possessed talent, and had great ideas – yes – but were also advantaged by a small and determined army of early enthusiasts, including their manager, who persevered through rejections from at least four major record labels.

In time, positive sentiment towards them snowballed into what Sunstein describes as an “informational cascade”, showing that we do not just rely on our own objective judgements to decide what is good, useful, or enjoyable, but rather make the decision in societal groups.

Instant account-to-account (A2A) payments enabled by open banking rules globally are entering their own “Beatlemania” territory. Merchants are tiring of the technical bottlenecks which lead to slow settlement times and chargebacks – not to mention expensive card acceptance fees. Meanwhile, open banking means consumers benefit from no longer needing to enter card details manually, or trust websites to store them.

And without labouring the Beatles metaphor too much, A2A is also taking off in the Americas and beyond. Look at countries like Brazil, where alternative payment methods have long rivalled cards. Pix, Brazil’s instant payment system, attracted 120 million users within a year of launching. Recent research from FIS found that 66% agree that companies that adopt real-time payments more quickly will be seen as more attractive to work with – by both customers and suppliers.

A2A payments also lead to indirect cost savings. The operational burden of reconciliation management is reduced because open banking payments are real time. This has positive knock-on effects, like being able to dispatch goods, initiate payouts, and issue refunds faster and with more certainty.

Yet there is still some GDPR-related nervousness around certain open banking implementations. Because many firms in the UK and European Union are worried about these rules, they block themselves from securely opening up data to innovative third parties and in turn, the benefits of the burgeoning open banking sector.

And it is right that the use of customer data should raise questions about consent, data protection, and security. But consider the benefits if firms can get these issues right. Recent analysis from McKinsey shows that the boost to the economy from broad adoption of open-data ecosystems could range from about 1% to 1.5% of GDP in 2030 in the European Union, the UK, and the US, to as much as 4% to 5% in India. Much of this potential growth would be attributed to greater efficiency and reduced fraud costs within payments and financial services more generally.

I believe there needs to be a more proactive effort across the industry to educate and protect consumers on how their data is being used. At the same time, more financial services firms will open their platforms to open APIs, leading to business types we have not yet seen.

This year and beyond, we will see winners start to emerge – and they will be those with elegant implementations of GDPR: those that make the transfer of personal information transparent and auditable, ensuring users can revoke consent at any time while retaining access to their data.

Cards have a long-established monopoly in the payments world, so it was always going to take time to convince merchants and consumers of a challenger’s benefits – even if they’re obvious. But, with open banking payments, the message is now very much getting through – on a global scale.

Now that the foundations have been laid for open banking infrastructure, the payments space race is on in 2022, to see who can “productise” best and fastest, with pole position taken by those with a data strategy as finely tuned as George Harrison’s guitar.