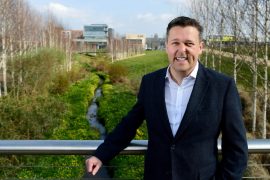 Dawson takes over the role on 30 March from the company’s co-founder, James McFarlane, who has moved on to the role of president as of 28 March.

The firm has also hired a new CTO in Sanjay Mistry, set to join in June. Mistry previously worked at Infomedia for over 17 years – most recently as CTO and COO.

Bringing over two decades of experience to the role, Dawson started his career at Orange, later holding positions at 3com, Talk Talk and Vodafone. He then joined Dynamic Mobile Billing where he worked for 11 years, with the last five as its CEO.

In his new role, Dawson will be overseeing PM Connect’s international growth strategy, with the firm currently claiming to reach one billion consumers in over 40 territories.

Speaking on his appointment, Dawson says he is “very much looking forward” to working with the team “to help further develop a vibrant, energetic and market-leading business”.

Founded in 2012 and headquartered in Birmingham, UK, PM Connect specialises in mobile distribution for major entertainment rights holders. The firm claims it now processes over 25 million payments per month.