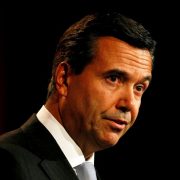 The Swiss multinational’s board of directors has appointed Axel Lehmann in his place, effective immediately.

Reuters reported last month that a preliminary investigation by Credit Suisse found Horta-Osório attended the Wimbledon tennis finals in July last year despite requiring to be in quarantine. At the time, Switzerland was on the UK’s ‘amber list’, requiring a period of self-isolation lasting 10 days upon arrival in the UK.

It was also reported in December that he breached Switzerland’s Covid-19 rules by leaving the country after three days when he was supposed to be in quarantine for 10 days.

In a statement released by the firm, Horta-Osório says: “I regret that a number of my personal actions have led to difficulties for the bank and compromised my ability to represent the bank internally and externally.

“I therefore believe that my resignation is in the interest of the bank and its stakeholders at this crucial time.”

Credit Suisse vice-chairman and lead independent director of the board Severin Schwan says the board “respects” Horta-Osório’s decision to resign and thanked him for “his leadership in defining the new strategy, which we will continue to implement over the coming months and years”.

Horta-Osório was elected as a new member and chairman of the board in April last year to revamp the investment bank following the Archegos default and Greensill collapse.

Tendering his resignation, Horta-Osório says he “worked hard to return Credit Suisse to a successful course” during his brief spell at the helm, and the new “strategic realignment will provide for a clear focus on strengthening, simplifying and investing for growth”.

Under the leadership of Axel Lehmann, Credit Suisse says it will continue to execute this new strategy, “driving forward the transformation of the bank”.

Lehmann says: “We have set the right course with the new strategy and will continue to embed a stronger risk culture across the firm.”

Prior to Credit Suisse, Lehmann was on the board of UBS Group, initially as chief operating officer and then as president of personal and corporate banking and president of UBS Switzerland.

Before UBS, Lehmann was at Zurich Insurance Group for almost 20 years, most of which as a member of the group executive committee.