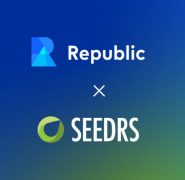 With this deal, Republic expects to rapidly advance its presence in Europe. It says it will commit additional capital towards expanding Seedrs’ reach in the region and will deliver new innovations and products for European investors and private businesses.

The Republic platform supports investments in private market equity, debt or crypto offerings and has almost $1 billion under management through its private asset management practice.

It hosts offerings across start-ups, real estate, crypto, music, gaming, and other sectors, with members in over 100 countries.

Seedrs was set up in 2012 and was the first regulated securities crowdfunding platform in the world. It claims to have had nearly £1.5 billion invested in its platform to date.

Republic and Seedrs have had a partnership for the last four years. The Seedrs leadership team have acted as advisors to Republic and the two firms have enabled companies to co-raise on both platforms.

Jeff Kelisky, CEO of Seedrs, says the deal is “a natural development of our partnership with Republic”.

Kelisky will join Republic’s leadership team and will continue as Seedrs’ CEO. Seedrs’ senior management will remain in place to continue to grow the UK business and deliver on Republic’s European expansion plans.

The deal also sees participation from Davidson Kempner Capital Management LP. It will become a shareholder of Republic through its acquisition of Seedrs shares from Schroder UK Public Private Trust, Augmentum Fintech, and Omnis Income & Growth Fund. These shares represent in aggregate approximately a 30% stake in Seedrs.

The transaction is subject to regulatory consent and is expected to be completed in early 2022.