Collaboration and the reinvention of banking and financial services

Banking and financial services companies have seen the writing on the wall for some time now. 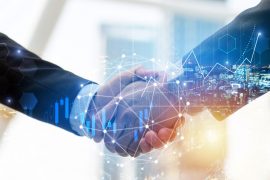 Banks and FIs should look to enable innovation through collaboration

Customers are changing. They’re moving from tellers and ATM machines to the digital realm where they seek additional, personalised, cashless services—services that have seen lower rates of adoption by many of the traditional financial institutions.

Waiting in the wings are fintechs and big technology (BigTech) companies. These include businesses such as Acorn, Chime, Robinhood, and Plaid as well as the more widely known names such as Apple, Google, Amazon, and Facebook.

All of these companies have stepped into this void, steadily stealing away customers. Perhaps the best example of this is Apple Pay, which according to eMarketer now has more than 43 million users.

The good news for traditional players is while they were late to the party, many did finally arrive and began to take action. But did they focus on the right areas of their business? The answer to that question is an emphatic no.

For these entities, the primary focus of their revolutionary efforts was cosmetic, with the bulk focused on making improvements to front-end customer experience. While the changes to the frontend may have been dazzling, in the backend, these businesses were for the most part still running on the same old legacy applications.

This short-term strategy was put to the test when the pandemic hit and a record number of consumers turned to online banking. This includes Baby Boomers, many of whom dipped their toes in the digital waters for the very first time.

According to Statista, 46% of US Baby Boomers are using new digital channels for their banking since the outbreak of COVID-19. When you consider that in 2018 this group had the lowest use of these digital channels, this figure is incredible.

The good news for banks was that they had their new frontends ready for customers which allowed them to achieve some levels of success. However, this faded fast when banks were being increasingly pressed to roll out new digital services to adapt to their growing digital customers.

Hindered by a short-term strategy, which largely ignored the need to accelerate the organisation’s complete digital process, some banks were not able to evolve to suit the needs of their customers.

For many consumers, this made fintech the answer, and the sector was one of the biggest successes during the pandemic. The shift is evident in many ways. For example, according to McKinsey, since the outbreak of COVID-19, there has been a 4-5% reduction in global cash payments. That is four to five times the average decrease in cash usage in recent years.

So where does this leave banks? There are those who believe the answer is to keep building their own digital capabilities. While building is a key strategy, it cannot be done with the intent of competing with these new entrants.

Efforts are better focused on building a solid foundation that enables rapid innovation and collaboration with the larger financial ecosystem of fintech and BigTech.

When building out this digital foundation, the goal should be to simplify the applications that are in place now. Abandon what’s likely a tightly coupled monothetic architecture in favor of a highly scalable, agile, simplified, and secure architecture. This provides a more future-proof system and allows banks to keep up with customer demands and the always evolving industry landscape.

Next, shift the focus outward. Specifically, identify partners, services, and fintechs that could be good innovation partners—and identify use cases to experiment on together. Once done, create prototypes that the two sides roll out together.

The third step shifts towards the BigTech players. Banks should begin productising services. These can include payment-as-a-service, lending-as-a-service, and others which they can then provide to the BigTechs and charge customers using their model of choice, like a monthly subscription or pay-per-use.

We have seen some signs of this already happening with Google, which late last year announced partnerships with 11 banks and credit unions including Citi and Stanford FCU. Working together, Google Plex, as it’s called, offers a mobile first bank account that’s integrated into Google Pay.

In the months ahead, we will likely see more and more partnerships being formed that follow Google’s lead.

For banks and financial services, the pandemic has shined a giant spotlight on where the industry is going and the steps businesses must take.

While the vast majority quickly discovered just how much work needs to be done, what Google has shown is that this opportunity is real for those ready to take it.

Sanjay Deshpande is EVP and Head of Banking and Financial Services, Americas at Virtusa.

In his previous role, Sanjay served as the partner and head of business development at Polaris for Americas and Europe.

Prior to joining Polaris in 2006, Sanjay worked with various organisations in the Information Communications Technology (ICT) space in the Indian Sub-continent and Middle East.