LINE BK is “an elevation for the financial industry”, says CEO

Japan’s messenger app LINE, which is used by some 86 million people in Japan, has been growing the customer base of its digital bank LINE BK since October last year.

Having converted 2.4 million of its customers across international markets Thailand and Taiwan, the messenger giant still has millions more customers to sway. 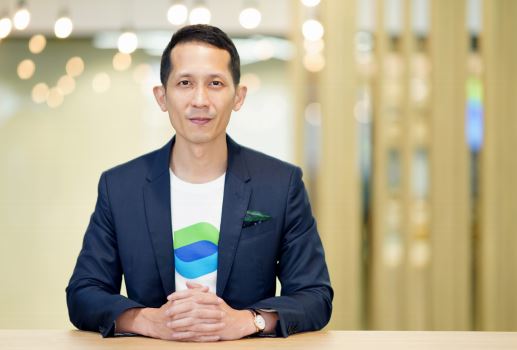 Tana Pothikamjorn, CEO of Kasikorn LINE: “In today’s digital world, we are stepping towards a so-called singularity era.”

Pothikamjorn thinks LINE can set a new standard “in the current [banking] system”, by promoting “wider financial inclusion for those underserved”.

A big part of the Big Tech’s banking effort centres around loans targeted at those earning less than $478 (or THB 15,000) a month.

As of early May, the messaging app’s outstanding loan balance stood at JPY 25 billion – or $230 million. That’s up from $165 million in late February.

The banking arm is yet to reveal how many of its 2.4 million customers have taken out loans. It said back in October it was aiming for one million of them to have taken out a credit line by the end of 2021.

LINE launched its first digital bank back in October. Starting off in Thailand with the help of Bangkok-based Kasikornbank, the banking arm looks to tap LINE messaging app’s 44 million customers across the region.

More recently, LINE expanded its digital bank capabilities to Taiwan, where it bagged an internet-only banking licence in February. In Taiwan, 21 million people have already downloaded the LINE messenger app.

Avoiding the barrier posed by customers having to download a separate app, the Big Tech divides messenger and banking services between different tabs in its original app.

As of 5 May 2021, the company has seen approximately JPY 123 billion ($1.1 billion) transacted through its messaging app, via the banking tab. Compared to $700 million in late February.

The app’s features include a “Special Rate Account” for savings, offering interest rates of up to 1.5% per year over 6-month and 12-month terms.

The first “all-in-one” to market

In Thailand, LINE reckons “other players have not fully imposed competition” as “all-in-one financially integrated applications” like itself.

“In today’s digital world, we are stepping towards a so-called singularity era,” Pothikamjorn explains.

“It is commonly said that people need banking but not banks. Consumers seek to have their financial transactions immersed into their different lifestyles. With LINE BK, they can chat, transfer, borrow, and pay with their social circles all within one application.”

LINE operates under two separate financial licences in Thailand. One for personal loans, and one for nanofinance.

It started by offering users a credit line under its nanofinance licence. Then later, it recommends personal loans under the other licence.

When it launched, the digital bank was averaging a notably lesser 6,000-7,000 applications per day.

Of these approved loans, around 30% mark the first credit line from a financial institution for their recipients.

And some 40% of LINE BK’s current customers are self-employed users, the company tells FinTech Futures.

The messaging app, like many Big Techs, has adopted a “super app” strategy which includes fintech services like the ones it offers in Thailand and Taiwan. The company ultimately wants to evolve beyond just a messaging app. With retail consumers thinking of their “Life on LINE”.