JS Bank has launched its Digi Cheque service across Pakistan, dubbing it the country’s “first ever” digital cheque service.

The Karachi-based bank has integrated the feature into its mobile banking app. It allows customers to write and issue a cheque “instantly”. The app already allows users to pay their bills on the go and make instant fund transfers. 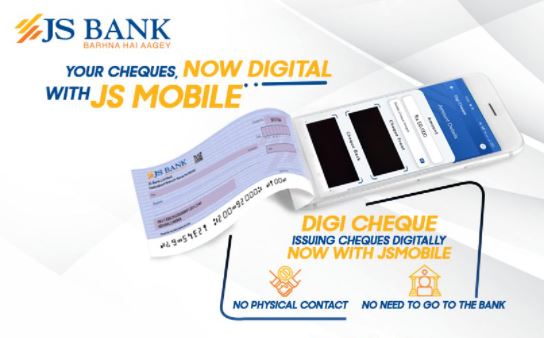 The launch follows the introduction of a series of new rules by the State Bank of Pakistan (SBP) in March.

These new laws are in a bid to nudge banks to use more digital platforms when settling transactions.

SBP also called for each bank – if they haven’t already – to create a chief digital office (CDO) role.

His employer was also the first lender in its country to launch self-service banking via a chat window in WhatsApp.

With some 216 million inhabitants, over half of which are unbanked, Pakistan is still in the nascent stages of digital banking disruption.

Fintechs are emerging in the region to speed up digitalisation. Fintech start-up Oraan focuses on digitising a more than millennia-old financial concept – ROSCAs, or rotating savings and credit associations. Such “committees” are popular in India and the Caribbean, as well as Pakistan.

Whilst SadaPay, a Pakistan-based digital wallet, is hoping to emulate the success of Indonesia’s super app Gojek.

“I am excited by the prospects of digital payments in Pakistan,” Gojek’s former chief technology officer (CTO), Jon Sheppard, said last July. “I see the digitisation of payments as still in its infancy.”

Despite the SBP unifying QR payment standards across the country in 2019, and the launch of a new instant payment system in January, the market is still in its early stages.

“Mandating interoperability of QR payments was a watershed moment in Pakistan,” SadaPay’s founder Brandon Timinsky told FinTech Futures in May 2020. “It’s the perfect regulatory conditions, with a bunch of legacy competitors.”

The SBP’s latest initiatives are only the beginning. It confirms there is more to come to ensure banks maintain comprehensive digital banking offerings for the foreseeable future.