The UK’s Office for Budget Responsibility (OBR) says it has not adjusted its economy forecast to include the Chancellor Rishi Sunak’s newly proposed infrastructure bank.

In other words, the OBR thinks the bank’s monetary impact on the UK economy will be little to none.

It also points out that the UK’s infrastructure bank, or “UKIB”, is 147 times smaller than its German counterpart.

This UK government predicts the Leeds-based bank will lend and invest around £1.5 billion a year, operating at around 0.1% of GDP.

Germany’s Kreditanstalt für Wierderaufbau (KfW), which holds around €506 billion in assets, operates at a much higher 14.7% of the country’s GDP.

The UKIB is a third of the financing provided to the UK by the European Investment Bank (EIB) before the EU referendum. 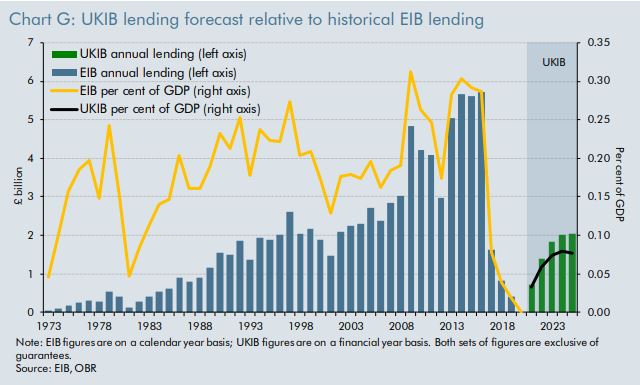 The government’s intention for UKIB is to boost private sector investment in UK infrastructure. But because it “replaces only some EIB activity”, the OBR says it will have “modest effects on public sector net borrowing”.

The Treasury has placed a cap on the bank’s capital for the next five years. It amounts to £12 billion in actual liabilities, and a further £10 billion in contingent liabilities.

The bank will also take over the UK Guarantee Scheme, which can currently issue up to £40 billion in guarantees. Though the bank will initially be able to issue £10 billion of this.

The Independent points out that this figure, £12 billion, falls short of the £20 billion recommended by the government’s own commission.

Ed Miliband, Labour’s shadow business secretary, says on the report: “Far from transformative investment in infrastructure, the Government’s new bank won’t even plug the hole left by the European Investment Bank and will see us trailing way behind countries like Germany.”