Goldman winds down Clarity Money to focus on Marcus Insights

Goldman Sachs is shuttering Clarity Money, the personal financial management service it bought back in 2018 under the Marcus brand.

Due to close on 5 March, the app and website wind down – first reported by The Block – follows the bank’s gradual transition of Clarity Money’s “best” features to the Marcus app. 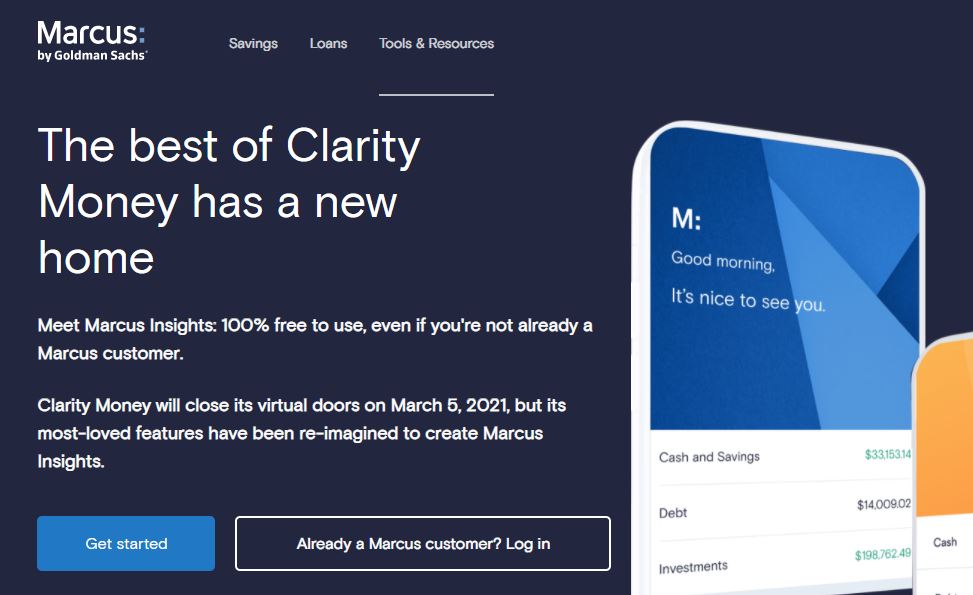 The email sent to customers reads: “While it’s the end of a chapter at Clarity Money, our team here at Marcus by Goldman Sachs can now help you make the most of your money with Marcus Insights.”

Online lending service Marcus offers its American users an app, but it is yet to release one in the UK – where rival JP Morgan Chase is planning to set up shop in the coming months.

When Goldman bought Clarity Money, it had some one million users after just two years of operation.

The deal value wasn’t disclosed at the time, but according to CNBC, it came to around $100 million.

“A lot of our thinking for Marcus Insights was informed by the experience we had at Clarity Money and what we know customers care about,” Adam Dell, Marcus’ head of product, told CNBC last year.

Marcus customers, who have had mass access to the app in America since October, don’t have to be Goldman customers too.

This year, the plan is to launch a checking account with Marqeta, as well as an investing service, under the Marcus brand.

These features would see Marcus take on both challenger banks and digital, fee-free investment platforms in one fell swoop.

Dell wants to move Goldman away from a sole reliance on unpredictable investment banking. And instead towards more predictable revenues from retail banking products. Hence the growing investment in Marcus.

At FinnovateFall back in September, the Marcus exec argued that a combination of a personal financial management (PFM) and a banking service is a powerful thing.

“It creates synergy between a financial situation a consumer is in and the products and services they can utilise,” he said.

But Goldman is yet to announce whether this feature will be transferred over to the Marcus app.

The bank is also mulling acquisitions to bulk up Marcus in the UK. According to three Reuters sources, the bank has set an “extremely high” bar for deals which need to be both large and transformational.

Investments paying off so far

In June last year, Goldman had to close Marcus’ easy access savings account to new UK customers because it was just £4 billion from hitting the regulated deposit limit.

In the US, Marcus launched its mobile banking app in January last year. At the end of 2019, its US total deposits for the first quarter stood at more than $50 billion.

By the third quarter of 2020, Marcus held a much larger $96 billion in deposits.

There’s no sign of rock-bottom interest rates letting up post-pandemic. Which is likely why Marcus has acknowledged the need to drive value beyond uncompetitive savings rates. That way, it can more easily retain the majority of its customer base, which flocked for the rates.