As our protagonist, Bank, lay warm and comfortable in its bed, it was awoken by a strange whispering sound. It was the “Ghost of Banking Past” who reached out and grasped Bank’s hand and dragged it out of bed. As they flew back in time, the ghost ignored Bank’s cries to leave it alone.

As they descended into Bank‘s first branch, they saw customers queuing to deposit their hard-earned money, entrusting Bank to keep it safe. Bank started lending money to businesses and soon expanded, opening more branches. Bank soon forgot about the customers once it found new ways of making money from the funds customers had entrusted it with. It saw itself growing and making more money for itself. It saw the huge pay and bonuses given to senior managers that helped Bank to grow even bigger whilst reaching new countries. Bank‘s love for growth and profit soon outgrew its love for customers. 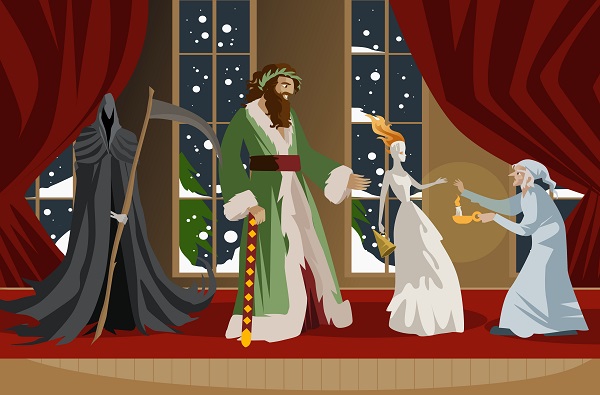 Bank woke up from its dream and spent the day in bed. The dream seemed so real. It was quite shaken by the experience. As the day wore on, Bank reminisced about the good times when there was little competition, and it grew at a pace. Soon it was evening and Bank fell asleep once again. What seemed like moments after shutting its eyes, it was awoken, this time by the “Ghost of Banking Present”.

Again, it was taken by the hand, its cries for release once again ignored. Bank flew over towns and villages where it once had branches which had now been converted into shops, bars and flats. Bank saw its customers struggling to understand how best to make ends meet, and then saw those that were not eligible. These were the people suffering the most, not knowing where to go for help. Ironically, some of Bank‘s staff that had been made redundant were now working in charities and advice centers, using their financial expertise to help the needy. Bank could see the destruction of the planet caused by large corporates that it had lent money to, or invested in, but shutting its eyes was useless as it was already dreaming. The Ghost stopped at the house of an ex-employee, Bob Cratchit.

Bob, who had worked many years for Bank, had a disabled son, Tim. Tim looked gaunt, and it was no surprise given that even his school was not providing meals. Inside the house, Bank sees the family gathered for Christmas Day. Though there was little food on the table, Tim has a present, and this makes Bank smile. Tim opens the present, revealing a packet of chocolate biscuits that Bob had got from the food bank. Tim is overwhelmed and Bank smiles at his joy. The Ghost turns to Bank and says, “the boy will die before he becomes a teenager if things don’t change”. Bank is then swiftly whisked away, back into its bed.

Bank had an uneasy day. It knew Bob had worked tirelessly for many years. “Bob should have saved and been more responsible” it thought, and carried on with its day. Soon it was night, and Bank fell asleep having consoled itself that it cannot be responsible for everyone that worked for it. A tall dark figure grabbed Bank by the throat, and without a word, took Bank screaming with fear. It was the “Ghost of Banking Future”. The ghost proceeds to show a “for sale” sign on Bank’s head office and those on a few remaining branches. The ghost showed that customers had moved on and had no remorse for Bank’s death. Bank felt saddened that there was no memory of it. Bank asked the ghost what happened to Bob Cratchit. The ghost showed Bob’s house where there were only memories of Tim in pictures hung on the wall. Tim had passed away. Bank too had passed away; it seems that Bank’s “Too Big To Fail” motto was no longer true. Without a grave for Bank, there was no memory left. As they flew back, Bank realised it had lost its purpose, and without a purpose, there was no legacy.

In the morning when Bank awoke, it realised the previous night was simply a dream. It now had a choice to ignore the warnings given by the “Banking Ghosts”, or to change Bank‘s future. It did not take long for Bank to make that choice, but as it looked at the clock, Bank saw it was Christmas morning. Bank got ready and asked its staff to prepare Christmas dinner and arrange a car to Bob Cratchit’s home.

Bob was surprised to see Bank, but welcomed it into his home, and helped bring in the food and presents from Bank. Bank hugged and played with Tim before they shared Christmas dinner. Afterwards, Bank discussed with Bob its plans to make itself purpose-led. “We’re going to change banking for good, and I don’t mean just make our bank better. I mean we’re going to stop investing and supporting businesses that don’t show they are taking care of the planet. We’re going to invest in our people and make sure they have the skills for a digital future, so they make sure we are meeting customers’ changing needs. I want both staff and customers to love our bank for what we stand for, so they want to be a part of it. We are going to make sure that anyone that needs a bank account can have one, that anyone that needs help managing their money knows that they can come to us. We can’t fix every customer’s needs, so we’re going to open our bank up and work with fintechs to reinvent customer journeys we can’t extend ourselves to.”

Bank spent most of the evening talking Bob through its plans. Although Bob knew that some of Bank’s competitors were already making these changes, he was happy that Bank realised that these changes were needed. Most of all, Bob was pleased that Bank had chosen which values were most important and had committed to being purpose-led.

I’m just saying, that as customers increasingly choose a brand not just for their products, but for their values, beliefs, and actions, then banks will need to be aligned with their customers. I wish you and your families and friends a merry and safe Christmas! Thank you so much for taking time to read my posts.