FinovateFall 2020: COVID-19 a chance to build, not just react

Since the 1920s kicked off the Great Depression, the world has endured a series of disruptions which have all led to “inflection points”.

But Scott Gnau, InterSystems’ vice president for data platforms, told an audience at Finovate Fall that this time, in the midst of COVID-19, we are experiencing an inflection point in a totally different environment.

It’s one where consumers have become much more agile and educated through digital channels. 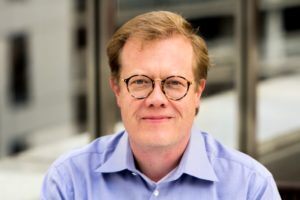 Gnau says it’s one thing to react to the crisis, and quite another to build an agile system which can stand the test of future disruption

“We are experiencing a dramatic inflection point in the context of a highly articulated and educated consumer with higher expectations than before,” says Gnau.

Whilst it’s a red-herring to directly compare disruptions like the 2008 financial crisis with a global pandemic, COVID-19 has had similarly catastrophic effects on the world’s economy.

In the US, for example, almost 6.6 million workers filed for unemployment benefits at the end of March. This ended a decade-long streak of employment growth.

Digital adoption can be roughly measured through smartphone penetration. Of the 7.7 billion global population, roughly 3.2 billion own smartphones, according to Statista. That’s more than 40% of the world.

But whilst 2020 is our “most digital” year to date, the pandemic has also highlighted the blind spots which can no longer be ignored.

Gnau says it’s one thing to react to the crisis, and quite another to build an agile system which can stand the test of future disruption.

“Companies need to leverage this inflection point correctly,” says Gnau. “My particular piece of advice is to build resiliency through these transformations. That way, companies can actually capitalise on these new environments to create new revenue sources.”

In an obvious sense, disruption can be quantified in volumes. Like Robinhood’s all-day trading downtime in March which locked out its – then – 10 million consumers. Or US banks’ downtime in April following the distribution of stimulus checks to some 80 million American citizens.

But it can also be quantified in other ways. Gnau highlights how bad data can also disrupt a company’s systems.

He uses the example of oil future contracts becoming negative. “Applications weren’t built to understand this, so you need to look at disruption in terms of valuation, as well as volume.”

Part of resiliency is also about how companies scale. For Gnau, “self-service is a way to scale”.

Whilst having the right technology infrastructure – such as the cloud – is important, he believes that autonomy “plays a true role in resiliency”.

“We talk about scalability in tech-terms, like the cloud, and volumes, but that’s just technology,” he says.

To scale more easily, many companies have moved towards end-to-end service providers to get to market faster and deploy with less hiccups.

But Gnau notes that in choosing an end-to-end solution, “you need to maintain control over data in the process”.

In his eyes, incumbents are well-placed. Being the triumphant owners of long-standing relationships, he thinks they can drive more personalisation than the fintech disruptors.