A gift of shoes 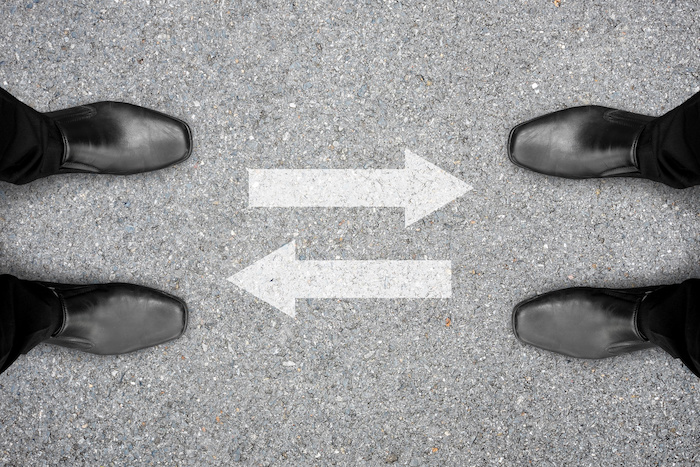 This matters only to suggest that we didn’t have direct and full visibility of each other’s work days. That’s why you have more than one person on a team. So that they can each do a job, separately. It’s efficient that way.

Said team member had views and questions. Passion and conviction. He believed in the Book and in doing things by it. He believed in good intentions and transparency. He did not believe in shades of grey. He lived – and I assume still does – in deepest black or starkest white. He was singular, occasionally rigid, always well meaning.

And one day we found ourselves having a conversation full of barbed wires and sharp corners.

Because he had made a few comments: abstract, academic, about the quality of leadership our team was getting in times of crisis. It doesn’t even matter what the crisis was.

Even if our COVID lives make any crisis past seem like child’s play, hard is hard and, in the moment, that is all you know. And when has the world of business not been in crisis, anyway?

Tell me. What would you have done differently?

That’s when it started getting tricky.

Because he’s a nice guy. And tied himself in knots trying to say what he was thinking without insulting me. Then walking back his own comments and statements, getting defensive and irate at himself. At me. At the situation. At having to now go from the abstract right to challenge to articulating the actual challenge. To my face. Nothing but two cups of tepid coffee and some discarded post-it notes between us.

An act of courage

And it shows care.

And it should be encouraged and celebrated.

Years ago, I spent two days shadowing my CEO as part of my professional development. After two days of endless meetings, most of them unpleasant, boring or challenging, I had one realisation and one question. The realisation was I absolutely, resolutely and fervently did not want his job. Ever.

The question was unrelated. It was idle curiosity. And his answer, a revelation.

Who brings you bad news? I asked.

Nobody. He said. Not in a timely manner. Not in an actionable manner. Not until there is a problem too big to not involve me in it.

Man. I thought. How did you get so inaccessible? You seem such a nice guy.

He read my mind. Or he had been me a few years back. Because he spared me having to ask.

The chair, the title, the boss badge have an insidious effect on people even when your door is open, your demeanour even and the worst that can happen if someone flags a problem in the making is that their counsel will be sought again.

And how right he was.

Because despite it all, I can see the truth of his words. No matter how small the organisation, no matter how accessible the manager, flagging the issue is telling on your mates. Bringing the bad news is escalation. And nobody wants to do that while there are options.

And what if the bad news is about the direction of travel itself? The steering of the ship? That’s the hardest thing to question. And the most essential.

So let’s take a moment to appreciate that when my team member presented me with a litany of failures, things I had not done well enough in his book, he was being brave beyond words. And that is why words did not come easy.

A gift of shoes

It was, as I said, a hard conversation. Full of false starts and backtracking. It was hard for him to sit there, in a small room with a TV screen on one wall and a badly wiped whiteboard on the other. The debris of office life and nowhere to look but each other as he listed the ways in which I had failed.

It was hard to listen to. But man oh man it was harder to say.

And this is what we both learned that day.

Because the reality of leadership is compromise. Making the most of often terribly constrained situations. Picking between a rock and a hard place as a marginally preferable option to sitting between them. Averting the silly train, daily. Questioning your own boss’ sanity and vision. Making decisions on incomplete data and with a clock ticking.

The thing is, when you come to criticise, hindsight is 20/20 and it’s easy to believe it should have been plain to see, easy to assume any meeting you were not in never happened. Any endeavour that didn’t come to fruition was not even attempted. Good ideas that didn’t work out were not even had.

It is easy, but it is wrong.

So when faced with choices that make no sense to you, circumstances that feel avoidable, problems that you feel your leader should have averted, criticising is hard. But asking the right questions is even harder.

What were the options you had and why did you take this course of action?

Do you feel the alternative would have been worse?

What was your end game there, what sacrifice did you make and was it worth it?

Why did you do that and if you had your time again would you make the same choice?

Literally, what were you thinking?

What were you fighting for?

These questions are actually harder to answer than “why are you so sh*t”.

They don’t allow you to get defensive or dismiss the person asking you as “not knowing the half of it”. Because they come from a place of knowing they don’t know the half of it and wanting to remedy that. Those questions say, “I am not happy with where we are but I want to walk a mile in your shoes before I pass judgment and here is what walking a mile in mine looks like, this is what the world looks like from my desk. Take that view and do what you will with it.”

And when you come out of the room you are both tired. And a little worried about whether you broke something between the two of you. But as the days pass and it all settles you realise nothing is broken. And although whatever the circumstances that led to the discussion had been would not have changed, you have both been given a gift of shoes.

And having walked in each other’s shoes you are both a little better at your job now.

He, a little wiser as to what the choices you were faced with were, even if he still disagrees with your course of action. He, hopefully equally fervent he would have made better choices in your shoes because hey that is what life, growth and development is all about. Being better each day, each iteration, each generation.

And you, a little wiser as to how you need to communicate certain things, or the terrible burden of the choice to not communicate how close to disaster you may have come, the choices you may have had to make to protect the team. And what is the point of making those choices if you tell them anyway, shielding them from a wave but teaching them to fear the storm?

Yet you learn what the world looks like standing in their shoes. You adjust and reflect. You accept some of that you can do nothing about. You explain. You narrate. And then, on your commute or even later as the day draws to a close and your balance your mental book in the quiet of the night, you keep the two or three things that he is probably entirely right about. Pivot points, inflection points, no return points. That maybe you didn’t recognise as such in the moment. That the external view casts in sharp relief. That, with hindsight, presented an opportunity missed. And having walked in each other’s shoes for an uncomfortable hour in the afternoon, you magically get to a brand new place. That can’t change the past and has little impact on the present. But it can do all sorts of wondrous things for the future.