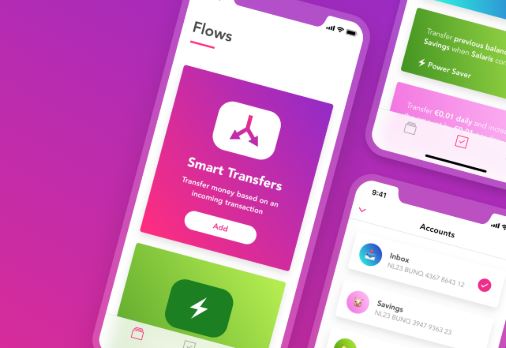 The Netherlands rolled-out PSD2 in early 2019, a year later than its European counterparts.

Flow manages users’ money-flows using an autopilot feature which acts a lot like a “pre-accounting method”. The start-up does this through automation and setting smart rules.

It can also recognise invoices, before automatically saving or depositing money into an assigned account, and sets aside VAT.

Whilst the offering is geared towards freelancers, companies and consumers can also use the service to save and manage cash flows.

The road to PSD2

At the end of last year, Flow raised €600,000 so it could afford its PSD2 licence. This means the application process took roughly seven months for the fintech, which it calls a “record time”.

There are nearly 60 PSD2-licensed fintechs in the Netherlands, but only around ten of these – including Flow – can initiate payments (PISP). The rest can only view bank data (AISP).

“Other apps look in the rear-view mirror and only show what you’ve spent, while your bank account shows a different balance. With Flow, you can look ahead and determine what you can spend on groceries or eating out next month.”

Flow was born out of a hackathon initiated by co-founders Daan van Klinken and Niels Mulder. “The idea for Flow originated a few years ago on an alpaca farm in Drenthe together with several programmers,” says van Klinken.

“We posted the concept on Twitter, and many enthusiastic responses soon followed.”

Flow says it is “already talking to banks from all over Europe” which are interested in the start-up’s technology.

Currently, Flow works with the Netherlands-based challenger bank bunq. Flow says its app “will soon after be available for all of Europe”.

It also expects to raise an investment before the year is out. Previous backers include Noordelijke Ontwikkelingsmaatschappij (NOM), Runtime Ventures, and Enigma Consulting.