Sberbank partners with Visa and Russian supermarket for ‘Take&Go’ store

Sberbank, one of Russia’s largest state-owned banks, has partnered with Visa and Russian supermarket chain Azbuka Vkusa to pilot its first ‘Take&Go’ store. 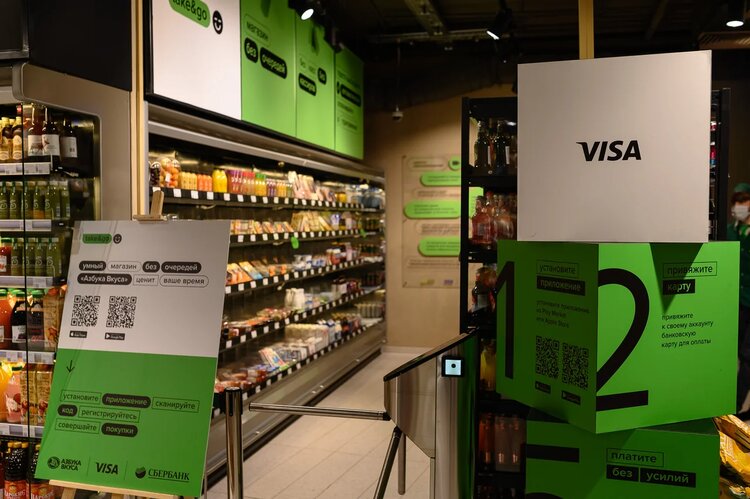 The bank says more than 1,000 users have downloaded the app the app to date

Shoppers download Sberbank’s Take&Go mobile app and associate their bank card with it, but rather than detecting purchases through sensors like Amazon Go, the store requires shoppers to scan QR codes through the app.

Shoppers will then receive a receipt via email, and the money will be debited from their card automatically, avoiding the checkout entirely. Sberbank says this is the first time Russia has implemented a store of this nature.

The store has been open to all since 9 June, following a three-week pilot with “a limited number of customers” which analysed more than 200 purchases.

The bank says more than 1,000 users have downloaded the app to date, and found Greek yoghurt to be the highest ticket selling item.

“This buyer-seller relationship model based on trust is relevant and it works, and we keep developing the format that is new for us, while now it’s available for everyone,” Azbuka Vkusa’s Take&Go project head, Sergey Cherednikov, said in a statement.

Cherednikov says the data from the pilot helped the supermarket fine tune its product range and improve its product rotation patterns.

“Recent months have changed our shopping habits,” says Visa’s country manager for Russia, Michael Berner. “Many of us have found out new channels and formats. We see how digitisation in general is gaining momentum everywhere and the opening of a store that utilizes computer vision is a good example of this trend.”

Currently in the US, Amazon Go has 24 stores across New York, Chicago, San Francisco, and Seattle – the first launching in 2018. The Big Tech is now testing if self-service through its app will work in a larger supermarket-sized store – i.e. 30,000 square feet.