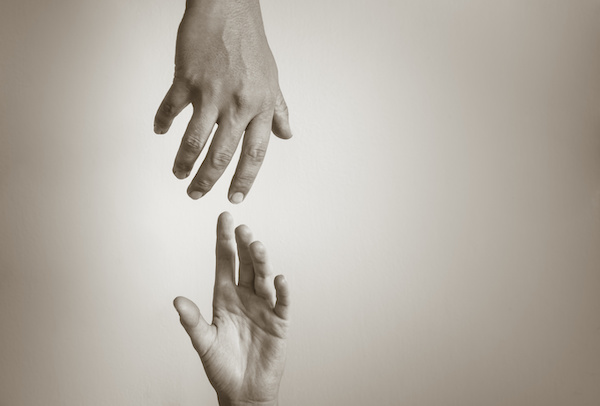 I have had my fair share of leadership training over the years and, I will admit, that the first time I heard the phrase “sponsorship is an active condition” my little mind was blown.

This is it, I thought. This is what I have been lacking all this time, I thought.

Sure, I had a senior sponsor, we all know nothing happens in a big bank without them.

They had kicked off the programme, signed off the job descriptions, shook the new hires by the hand. Sometimes even gave us a budget. Then moved on. There was a comms schedule according to which we would keep them updated and, for the rest, their people would be “on point” day to day and they were apart, a red phone, a point of no return, an escalation point.

If only they were engaged, thought Young Me.

They would know. They would fix. They would shorten some of our pointless, endless run-arounds that leave us exhausted and battle-worn, standing exactly where we had started after avoidable fights and unproductive confrontations seemingly designed to see whether we have what it takes to be allowed to live another day. A test of fitness rather than a way to progress.

Middle managers and the endless swamp

If the sponsors were engaged, I wouldn’t get stuck in the swamp again and again, thought Young Me.

And let me tell you, the day I heard one of the most senior people in our bank describe middle management as The Swamp, where things get stuck, where things sink, where things die miserable, slow, damp deaths, my little mind was truly blown for a second time.

Firstly because I discovered you are actually allowed to say what you think in a big bank (a lesson I didn’t need to have repeated) and because I had, until then, lived in the vain hope that the reason we were all locked in this endless, fruitless battle with middle management was because the Senior Sponsors in their lofty High Places on the upper floors, didn’t know.

They were naïve, distracted, doing more important things elsewhere. Whatever… but they didn’t know how we struggled through unnecessary minefields of the organisation’s own making each day. And that’s why they let it happen. Because it was too low level for them to bother, too low intensity for them to care or too low latency for them to notice. And yet pervasive enough for everything to get tangled, slowed, weakened and more than often killed in its sticky, a priori resistance.
But oh no.

Here is the Senior Sponsor of many a bedraggled initiative, the shining benefactor of many a programme mired in internal feuds and entirely unnecessary battles saying: oh I know.

Middle Management, she said with a bitter laugh, squeezed from the top, challenged from the bottom. Hungry for resources. Beaten back one too many times. Often not ambitious enough, more often than not not good enough, to get out of that miserable place and, before you know it, they are part of a Swamp. A Swamp you have to cross to get anything done. The Swamp where everything will get stuck. Where pointless battles will be fought. Where the direction of Senior Sponsors will matter little and the heartfelt efforts of young whippersnappers will matter even less.

I don’t know that I have come across a sadder thing in all my time in banking.

Sadder than the Swamp itself.

The admission of its existence and inevitability.

The acceptance that people will be stuck in it, become it, and all your best ideas will have to deal with it for no reason other than… it’s there and enough people seem to think it’s here to stay that it does.

I sat back in my seat with one thought.

I am middle management.

Recently promoted at the time and at no small personal cost in terms of labour and effort. And here is the top brass saying good luck not getting stuck among the invisible disaffected masses of mediocre folks who never wanted more or never could achieve more and now they shuffle along the bank’s corridors day in day out, executing tasks and saying “no” a lot. Because let’s face it, middle management doesn’t come with much power and the little you have, you exercise when things get desperate.

And the Swamp is almost always desperate.

I had one thought that day: I can’t stay.

I have to cross this Swamp fast and come the other side.

I have never been so hungry for promotion in my life. I became consumed with the single thought of not being of the Swamp. I became even more determined than normal – and let me tell you, that takes some doing.

I was out of the Swamp double quick. I got the promotion. I got the title. I got the Keys to the Kingdom. I got to speak to the Senior Sponsors casually. No Escalation Drama. I could sound them out, get their thoughts, push and cajole.

I was one of them. Or near enough.

And, you guessed it, the penny finally dropped.

Their absence was never an absence of awareness or interest. Fancy that.

They stayed aloof because they didn’t know what else to do.

They let the Swamp do its thing because they didn’t know how to stop it.

That’s why you were on your own.

You were never alone, were you?

For any of us who have navigated a big organisation to successful outcomes against impossible odds, for any of us who survived crossing the Swamp, there was always a long line of people, a huge group of humans, who helped.

In ways big and small.

By finding you equipment when the powers that be wouldn’t sign off on budget. By cutting code or encrypting and scrambling client data over the weekend to give the team a hand.

By breaking a little rule here, bending a bigger rule there.

By bumping you up in the release plan.

By finding the right reference for the right form and getting a set of sign-offs unstuck after weeks in limbo.

People who quietly did the thing that was needed.

Knowing that their own Middle Manager Swamp Lord of a boss would tell them off and make their ascent into the Swamp a little bit harder.

And knowing that the Senior Sponsors may never hear of their help. And if they did, they wouldn’t understand or appreciate how important it is that the audiovisual guy found you a way to demo when the corporate wifi rules changed overnight and you had clients in the room and nothing was working, or the junior QA wrote test scripts in their free time to get you past their boss’s intransigence, understanding that their resistance was part power-trip and part total confusion when faced with the new and unknown. The financial controller who unpicked the tangle of rules not designed for what you are trying to do, for you to get the approvals you needed, the HR admin who helped you stand firm by principles the company didn’t agree with but didn’t always need to know about.

I have gotten a lot done in banks that didn’t expect me to succeed.

In banks that occasionally did their level best to stop me, in order to make a point about Swamp Inevitabilities.

In banks that desperately wanted me to succeed but didn’t know how to get out of my way.

Every day of every year, someone in an obscure desk, usually in a basement or back room, with no title and no great support from the top, quietly helped me find my way to the next step. And maybe they wouldn’t have driven the strategy all the way without me but I would have not gotten past GO without them so, two decades in, I say: sure. You need a Sponsor in a High Place, but better if you are one.

And sure, you will have to deal with the Swamp, but better if you don’t think it inevitable and maybe give the people in it a path to being something else?

We spend years telling people nothing happens without friends in high places.

I beg to differ.

Then you need friends in low places.

Who will save your life and think nothing of it. Who will do their thing with a smile and a wink. And they’ll say, you go girl.

And they won’t want recognition.

They never want recognition, that’s how you know who they are.

They have seen through the Swamp and don’t care to become it or cross it with the fiery fury people like me are consumed by, and they are given no other option. So they stay put. They do. They solve. They save the day. Every day.

And they stay on their invisible shores.

They save the bank in small and quiet ways every day. And the Swamp stays murky. And the Senior Sponsors stay baffled as to how some of the magic happens.

So let it be a secret no more.

If you want something done in a bank you don’t need friends in high places. You need friends in low places. And if you are a good friend you don’t expose the rules they broke and shield them from their bosses’ ire.

But if you are a true friend, you take on this madness as the next battle you fight.

You will need all your friends about you for this one, mind.

Because of all the battles you have fought, this will be the longest, the hardest and the most meaningful.

And that is ok, ‘cos here is the one question nobody asked you yet: all the folks who were your saving grace along the way, what would it take for you to be theirs? And the answer is not obvious.

What can you do for them, in a world where one size doesn’t fit all, your fire doesn’t consume all and yet all need them: those doers, those saviours, those quiet problem solvers, your precious saving graces and friends in low places?