Magyar Nemzeti Bank (MNB), the central bank of Hungary, has unveiled its first Fintech and Digitalisation report which explores the state of play in fintech and the level of digitalisation across incumbent banks.

The report recorded 110 domestic fintech companies operating in Hungary in 2019. Of these companies, those which are Hungarian-owned are largely micro and small enterprises, 66% of which were profitable in 2018. 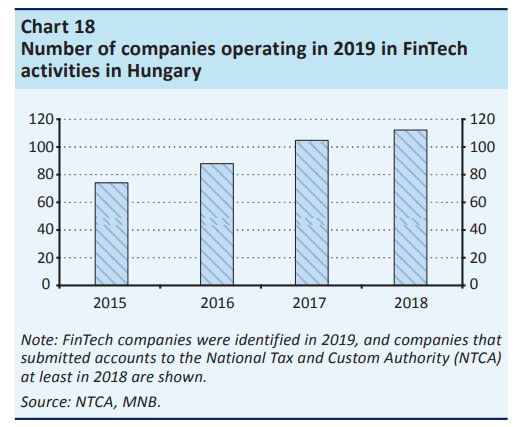 The number of fintechs cropping up in Hungary has seen little increase, with most of the identified fintech firms established since or pre-2015.

Those already existing have, on average, grown their workforces by 60% between 2015 and 2018, with most employees getting recruited in investment, financing and insurance divisions.

The slow growth in Hungary’s fintech sector is down to a few things, according to the data. Firstly, cash transactions were still above 80% of the country’s total transaction share in 2018, decreasing just 5% in three years.

The central bank has tried to address this by launching an instant payment service last month. It says that during the first two weeks of operation, it initiated more than 5.3 million transactions.

“The introduction of this system can fundamentally change domestic payment behaviour as the uses of instant payment are much broader than intraday transfer, thus providing an electronic alternative for many payment situations which could previously only be solved with cash payment,” the report reads.

The level of digitisation in banks has also had a knock-on effect for fintechs’ progress. Despite banks telling MNB they are willing to work with fintechs, the number of fintech solutions integrated into banks’ operations “remains low”, according to the report.

Of the just four fintech companies which have Account Information Service Provider (AISP) licences – the licence that, with customers’ consent, allows third parties to access banking data – only one of them has launched its open banking service.

The report created a digitalisation scale of 1-100 for banks, finding they ranked on average at ‘51’. “Fully online services are presently only available in the fields of account opening and personal loans,” the report revealed.

Only 65% of current accounts can be opened digitally across Hungary’s banking industry, and a measly 10% of customers with personal or housing loans receive information from banks about these loans via digital channels once they apply for one. 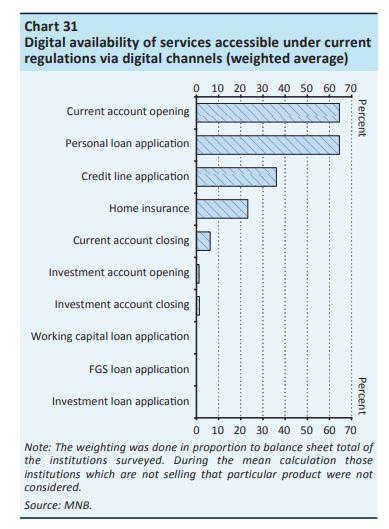 In terms of executive management, only “a few institutions” have digitalisation managers as members of their board, suggesting little pressure from the top down for banks to change.

The report puts the lack of digitalisation in the banking sector down to “regulatory limitations” and a “low level of digital maturity”. Though the central bank has tried to change this with its instant payments service, it concludes that there is still “no clearly dominant direction” for regulation yet regarding fintech and a drive to meaningful digitalisation.

Blockchain and cybersecurity are the least occupied sectors, and in 2017 there were just four alternative online funding platforms, prompting the report to call for regulations which would boost the country’s number of alternative financing providers.

Most of Hungary’s fintechs currently operate in the business-to-business (B2B) space, with less than 10% of them braving business-to-consumer (B2C) services. This is likely down to a combination of low card penetration rates and a lack of competition in digital services currently offered by banks.

But despite the lack of fintech growth and digitalisation in banks, the report surmises that there is “mounting demand” for innovative financial services which can be used “quickly and comfortably”, and that there is a young “digital native” generation without traditional banking relations ready to be tapped by fintechs.

Read next: Hungary’s central bank says major lenders could be “forced out” by fintechs