Financial Innovation Now, an industry group which represents America’s largest non-bank financial firms such as Square, Intuit, PayPal and Stripe, sent a letter to US Congress on 20 March asking for its members to be included in the country’s emergency government funding.

The move follows a series of pledges made by the government to American businesses and consumers this month amid the worsening coronavirus, which include a $1.5 trillion injection from the Federal Reserve into the financial system, a break on student loan repayments, and a $700 billion quantitative easing programme which has no limits on its asset purchases. 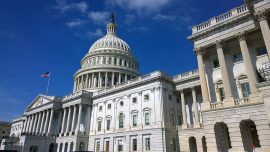 But US non-bank financial firms want to step in and help the government keep afloat some of the worst affected small businesses currently in danger of complete collapse as their demand plummets.

“Any federal small business loan programme must leverage digital advances in the marketplace to ensure that stimulus can reach those business most in need.”

Legislators are currently working on a bill which addresses small business loans, to be managed through the US government’s Small Business Administration (SBA).

The industry group’s letter asks that Congress direct the Treasury “to provide conditional capital to alternative online lenders”, “permit these non-bank lenders to disburse loans, including via partnership with financial institutions”, and to “allocate a portion of funds for distribution via these lenders”.

If non-bank financial firms like these were to be thrown into the mix, Congress would have to add a provision allowing non-banks to serve as conduits to SBA Disaster Assistance Programmes.

Firms such as Intuit, Square and Stripe all offer immediate small loan services. Stripe Capital says it offers flexible financing which can arrive in a business’ pocket as quickly as one day after application.

With these sorts of technology capabilities, it’s understandable that these firms want to be included in the government’s fast turnaround plans to prop up small businesses, especially when an SBA loan takes 30-45 days on average to arrive.

And with half of small businesses only holding a cash buffer of less than one month, according to a 2016 JP Morgan Chase Institute survey, these firms are glaringly aware of the desperation these small businesses will face soon in search of alternative cash flows.

Getting involved in a government-led small business loan programme would also be hugely beneficial for the likes of Square and PayPal, whose shares have gone down in recent months due to industry fears that consumer spending will substantially slow as a knock-on effect of state-wide lock downs.