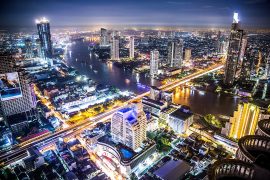 The bank had designed the service for Thailand’s migrant workers from Cambodia, Laos, Myanmar, and Vietnam, as well as a slew of other southeast Asian countries.

Named SCB Easy, the system is being offered to businesses as well as individuals through RippleNet, Ripple’s global payments network.

“[SCB Easy] runs on Ripple and allows our customers to send money to family and friends abroad from their phones,” says Arthit Sriumporn, senior vice president of commercial banking.

“Transfers happen in real-time but are still cheaper than the five-day process. We’ve used RippleNet to connect to banking partners around the world, which helped us open up more corridors and serve more customers quickly and easily.”

SCB is Thailand’s third-largest bank by assets. Founded in 1907, it operates 1,150 branches and is part-owned by the king of Thailand.

In November 2019 the bank announced that it would be turning some of its technology divisions into separate companies to compete with fintechs in its home market.

Ripple, for its part, has been highly active in Southeast Asia. In late February it announced a new partnership with money transfer firm Azimo, opening up digital remittances to and from the Philippines.

Both firms saw the Philippines as a lucrative and important market in the remittances space. The Philippines is one of the top remittance destinations globally, receiving $34 billion in 2018.

It was revealed that another Ripple partner, MoneyGram, had received a cash injection of $11.3 million after selecting Ripple’s on-demand liquidity (ODL) platform.