The UK is set for another challenger, as prospective Islamic digital bank Rizq launches its beta programme this week. 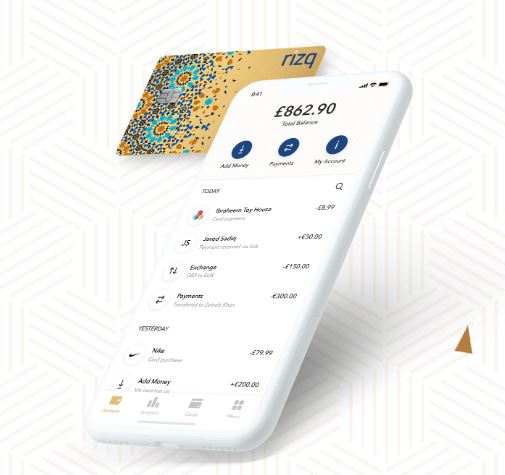 On social media, Saleem says Rizq plans to benchmark itself as close as possible to existing challenger banks.

The prospective bank currently operates a placeholder website, though a full version featuring the bank’s pricing models and Sharia-complaint structure is in development.

“The task of opening and maintaining ethical Sharia-compliant banking products in the UK is confusing, tedious and operationally traditional,” the firm writes.

“UK Muslims are looking to bank with a companion that can provide a streamlined and seamless experience within the Western world, without compromising on their beliefs and value system.”

Rizq plans a UK launch in 2020 followed by an expansion into Europe “and beyond”.

Several other Islamic challengers could claim to be Europe’s first.

Ummah Finance launched in the UK in April 2017, but has since re-branded to ethical digital bank MoneeMint.

Insha, a German Sharia-compliant banking app, launched in October 2019. Based in Berlin, the bank is a digital offshoot of Istanbul-headquartered Albaraka Türk Participation Bank and was first developed in mid-2017 for the Turkish market.

Niyah, an Islamic challenger bank which also claimed to be the first of its kind in the UK, launched in January.

The UK’s first Islamic bank, Al Baraka International, launched in 1982. This was followed by the growth of bespoke Sharia-compliant products in trade finance, and leasing.

London is the world’s leading Western centre for Islamic finance, according to a report from law firm Trowers & Hamlins. Sharia compliant assets within the UK totalled £4.7 billion in 2017.

There are five Islamic banks in the UK, while around 20 other lenders offer Islamic wealth products and services.