Public.com raises $15m with help of Will Smith and JJ Watt

Public.com, one of the newest entrants into the commission-free stock trading app space in the US, has just landed $15 million from a number of celebrity, media and sport investors including actor Will Smith, Girlboss CEO Sophia Amoruso, and NFL star JJ Watt.

The round was co-led by existing investors Accel and Greycroft – both early backers of the now PayPal-acquired social payments service Venmo. 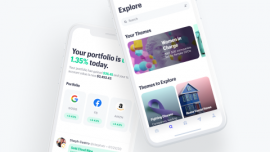 The 35-person start-up has been live since last December

The start-up, whose USP is focused around making investing ‘social’, says its new funding will go towards growing its “broad community of investors” which it says “bring a powerful blend of perspectives and domain expertise to the platform”.

This aim is in line with the start-up’s wish to provide a social feed where investors can learn about and understand the stock market at greater depth as they trade.

But similar to many competitors, the app gives customers the ability to invest in stocks commission-free, and own fractional shares from $1 a slice. Original exchange-traded funds (ETFs) are also available on the platform, and users can earn 2.5% interest on up to $10,000 of uninvested cash.

Co-CEO Leif Abraham tells Crunchbase News that this focus on sociable investing is driven by a wish to get people investing earlier in their lives. “My dad personally was investing for a long time, but the weird thing is I only personally invested about four years ago, around the time I turned 30,” he says. “Now I wake up every morning wishing that I had started earlier.”

Fellow co-CEO Jannick Malling agrees, saying that “the biggest problem in this industry is that many people are intimidated by it”. “Public.com lets them invest in the stock market from a sense of community,” he adds.

The 35-person start-up has been live since last December, following roughly a year operating in beta. Both CEOs stress they are “actual stockbrokers”, offering more than just an app around investing.