As part of its long-term aim to become profitable in the next two to three years, the UK challenger bank is ramping up the new revenue stream alongside other money-making initiatives such as its US launch and the re-launch of its personal Premium accounts. 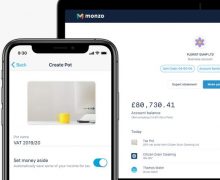 Both of its new business accounts will come with a current account, a debit card, mobile as well as web access, spending categories and in-account cash separation – very similar, if not identical, to its retail offering.

Monzo’s niche in business banking seems to be targeting freelancers. Its Tax Pots feature, which calculates and automatically sets aside the tax freelancers need to pay based on their annual income, will help one-person businesses avoid seeking expensive help from accountants.

Monzo has been beta testing its business banking solution for roughly 12 months with around 2,500 SMEs, having until now held back from the space

The bank will require business owners to have a Monzo personal account before signing up to Monzo Business.

Chief executive Tom Blomfield told City AM that the personal account requirement was to help the bank get the product to market faster by piggybacking of its already existent know your customer (KYC) process.

“That will change in future, but right now it’s the safest way for us to launch because we’ve already done all of the necessary checks so we can use that as part of the sign-up process,” he said. “It’s just to get this launched in an expedient and timely manner.”

Blomfield also reveals that the business accounts would have arrived sooner if Monzo had secured a slice of the £775m Banking Competition Remedies fund, which is now being redistributed in part after Metro Bank was asked to give a portion of their slice back earlier this year.

“If we’d have won it, [the accounts] would have been live before now and it would have included some balance-sheet lending,” he said. “But it’s taken a bit longer, and it didn’t have the team to build this, so it doesn’t have any lending right now.”