bunq, the Netherlands-based challenger bank, has expanded its partnership with Mastercard to deliver its ‘Green Card’ to 30 European countries.

The metal Mastercard plants a tree for every £100 or €100 spent on it. Since the start-up launched its Green Card in November, it’s seen more than 100,000 trees planted for every €100 spent. 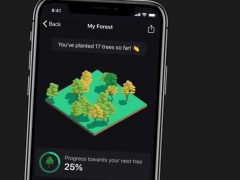 bunq works out it’s saved the equivalent CO2 emissions of 32,560 flights from Paris to New York

Between the end of January and February, the challenger’s sustainable initiative saw €3 million spent through its platform.

The card, which is also produced in an environmentally friendly way, has therefore accounted for a CO2 reduction of roughly 30.8 million kg, what bunq works out to be the equivalent of 32,560 flights from Paris to New York.

“We are extremely excited to take our partnership with Mastercard to the next level,” says bunq’s founder and CEO Ali Niknam.

Read more: bunq CEO: “It’s a marathon not a sprint, we run our own race”

“Together with our users we have established an easy way for everyone to create a greener world with zero effort.”

Formed in 2015, bunq’s partnership with Mastercard has also authored the challenger’s Travel Card, which offers travellers “the real exchange rate” anywhere in the world.

Mastercard has now partnered with more than 60 digital banks and fintechs across Europe, doubling in the last two years.

“People want and expect the technology they use to not just be safe and simple, they are increasingly looking to have a positive impact on the world they live in.”

The roll out will mean bunq’s Green Card is available in all 30 European markets it currently covers with its standard offering, including Germany, Italy, Spain, France, the Nordics and the UK.