Interim HSBC CEO Noel Quinn has been appointed on a permanent basis after leading the bank for seven months, writes Jane Connolly. 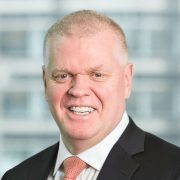 MarketWatch reports that Noel was described as “the outstanding candidate” for the position, despite having not made the shortlist in earlier CEO successions. He took over from ousted John Flint last autumn.

The bank has faced significant challenges caused by the current coronavirus outbreak, political unrest in Hong Kong, trade tensions between the US and China, and Brexit uncertainty in the UK. But HSBC has been the second-best performer on the Stoxx Europe 600 Banks index this year, with a 16% decline.

During his time as interim CEO, Noel Quinn has cut 35,000 jobs and scaled back operations in Europe and the US.

“Noel has proven to be the outstanding candidate to take on a role permanently that he has performed impressively on an interim basis,” says Mark Tucker, HSBC chairman.

“He has shown a great understanding of HSBC, the challenges we face and the significant opportunities for growth that lie ahead.”