Global fintech funding results show 2018 is still the reigning year for fintech investment, according to a report by Crunchbase.

The report shows that 2019 was the second highest investment year for fintech over the last decade, more than $14 billion short of the funding the sector received the previous year.

This could be down to Ant Financial’s whopping $14 billion Series C round in 2018 which arguably skewed results, once you take this away 2019 is still $600 million short of 2018’s results. 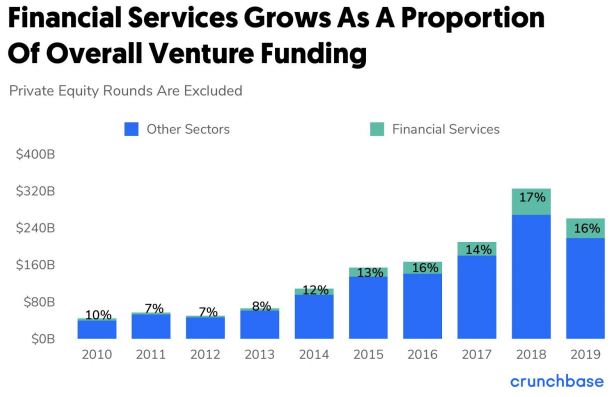 Last year saw an overall 1% drop in the amount of venture funding made up of fintech capital compared to the previous year, going from 17% to 16%.

Of this 16%, seed and early stage investments went up 2% in 2019. Some of the most active seed investors which helped with this rise include Techstars, Y Combinator, 500 Startups and Plug and Play, together funding roughly 452 fintechs.

As of February 2020, year-over-year deal counts were also down by 22%, but Crunchbase blames this on reporting delays.

Goldman Sachs is the only bank on the list of top investors when factoring in the largest investments in fintech. Backing a total of 25 fintech companies between 2018 and 2019, the stand-out figure suggests its investment strategy has a far heavier attention on fintech start-ups than its US incumbent neighbours.

Citigroup is also often referred to as one of America’s biggest banks betting on fintech, but did not feature on Crunchbase’s list.

Insurance and banking were the fintech sectors which grew most organically, with big deals such as Minnesota-based Bright Health’s $635 million Series D and US challenger bank Chime’s bumper $700 million funding dominating 2019.

As rounds got larger across the board, more fintech unicorns emerged. Of the 580 global private unicorns, 90 of them (16%) are in the financial services sector as of February 2020.

Some of the biggest include China’s Ant Financial, America’s Stripe, India’s One97 and Brazil’s Nubank.

Read next: Australia’s Commonwealth Bank to back 25 start-ups